Let’s be honest. You have always wanted to see a ninja fight a dragon. 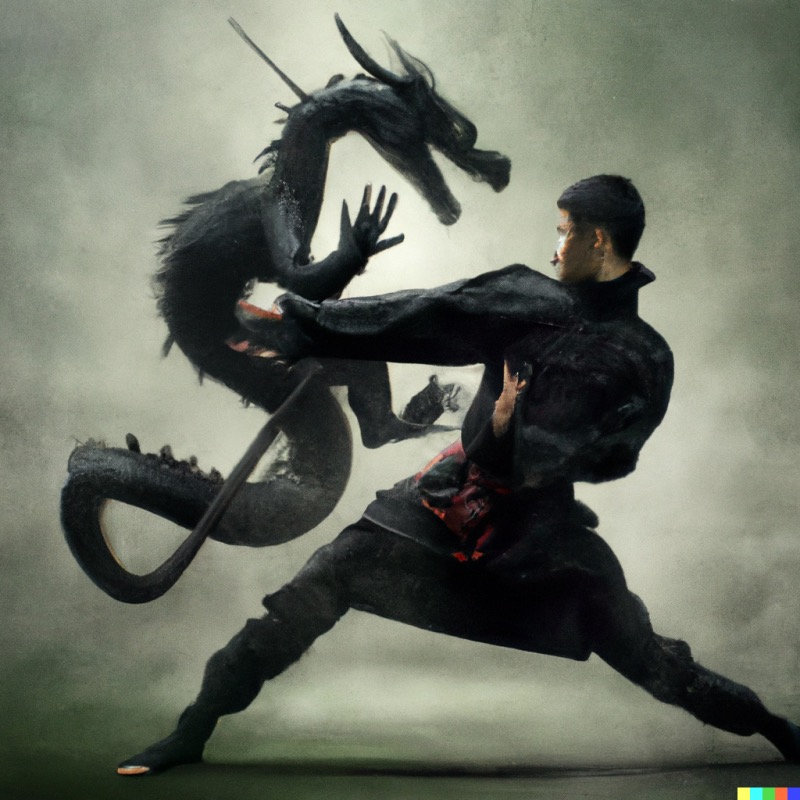 I created this image, which would surprise anyone who knows my level of artistic talent (i.e., circles and the occasional stick figure).

Of course, I had a little help creating this masterpiece. I used the Dall-E platform, which employs artificial intelligence (AI) to create images from a user’s description.

To become an instant artist, you just go to the Dall-E website and type in something like “Goya-style painting of a mysterious stranger showing up at your front door.” AI takes your suggestion and creates this: 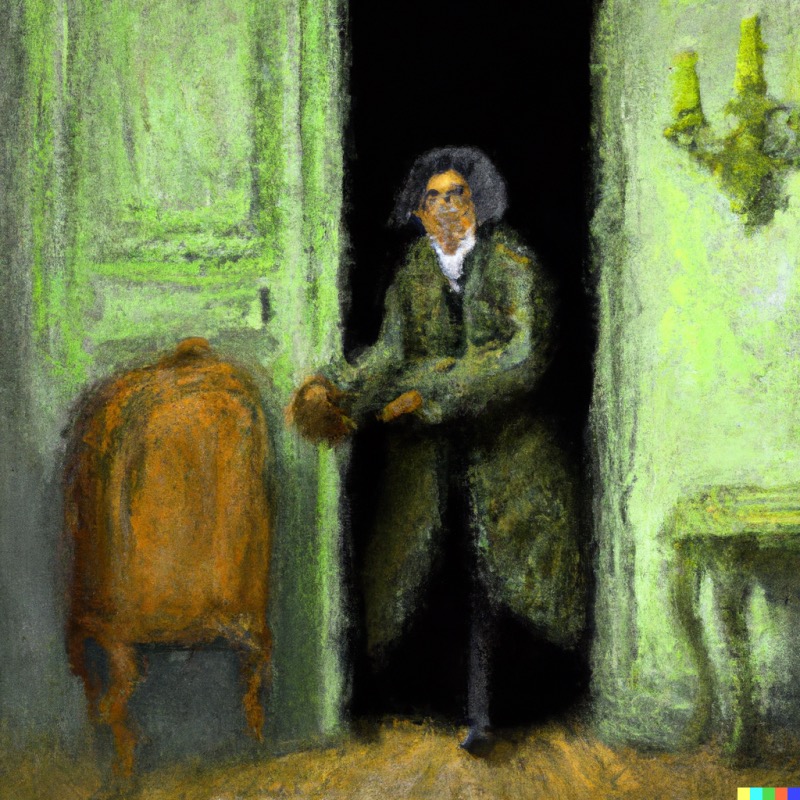 Wow. If that’s not a book cover for a creepy gothic novel, then I don’t know what is.

And it’s not just illustrations. AI can mimic photography to an astonishing level of detail, including style, lighting, and film quality. 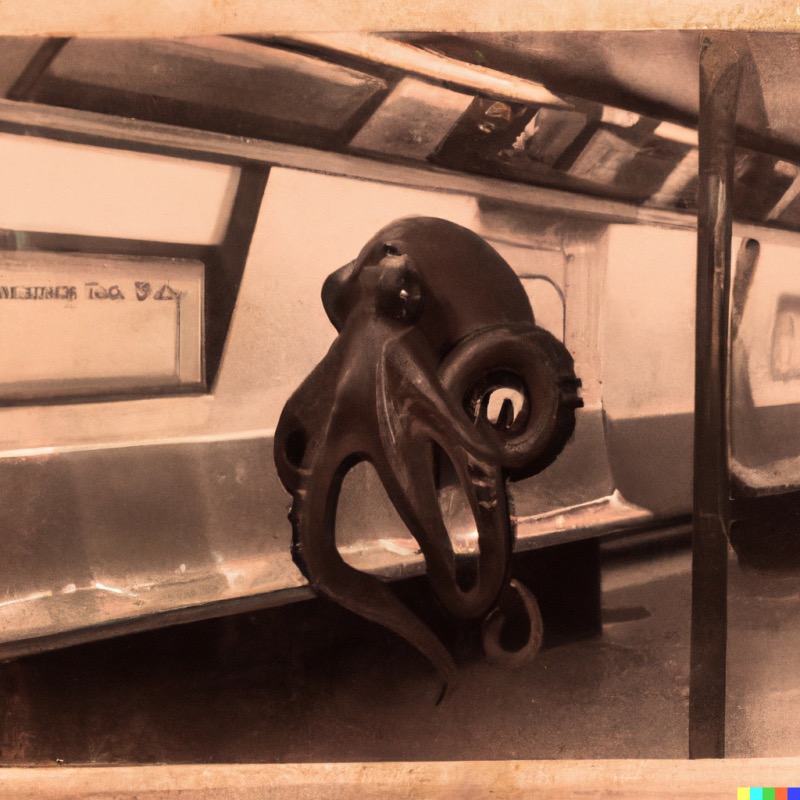 OK, that’s all pretty cool. But are there any downsides to this theoretically “limitless creativity”?

Do you really have to ask?

It seems that “hostility and skepticism are already ramping up” among both graphic artists scared of losing their jobs and technophobes who say humans can’t “compete with the speed, cheapness, scale, and, yes, wild creativity of these machines.”

You’ve likely already seen the first shots in the skirmish over AI, when all of your Facebook friends recently turned themselves “into digital art with the help of an artificial intelligence-generated app called Lensa.” But critics say this app not only created data privacy issues but basically functioned as a scam to steal “artwork from digital creators.”

It’s all a bit dizzying. After all, we were told that AI would eliminate boring and mundane tasks. Technology would give us more time to write poetry and paint landscapes and dabble with photography.  We were “reassured that computers were incapable of being truly creative.”

But AI-enabled platforms create more than 20 million images every day, and tech that was “once considered capable only of unimaginative, routine work” can now “create award-winning art.”

And it doesn’t stop with the visual world.

The app ChatGPT “can construct remarkably well-structured arguments based on simple prompts provided by a user.” Other apps can “mimic writing at a level so convincing that it’s impossible to tell whether the words were put together by a human or a machine.”

Many educators are concerned that students will just let a bot handle their essays, thus degrading literacy and eroding the ability to write well.

That’s not a far-fetched scenario in a world where AI can create “new stories in the style of famous writers, write news articles about itself, and produce essays that could easily receive a passing grade in most English classes.”

But, of course, AI will never replace human writers, especially guys who write about politics and Latino culture, and who pen the occasional zombie novel.

In any case, there is an even darker side to this dark side of artificial intelligence.

You see, deepfake technology “enables anyone with a computer and an internet connection to create realistic-looking photos and videos of people saying and doing things that they did not actually say or do.”

Techies predict that, soon, deepfakes “will be indistinguishable from real images,” creating an online world where nobody will be able to differentiate between a video of an actual event and a computer-generated manipulation.

In this way, “deepfakes threaten to grow from an internet oddity to a widely destructive political and social force.”

Think about all the people who believe idiotic ideas, wild conspiracy theories, and easily disproven lies just because they read a few lines of text on someone’s social media feed.

Now imagine a video that sears that craziness right into their eyeballs.

Remember our QAnon friends? The millions of lunatics who advocated for executing liberals—with the most extreme even murdering their own children—all because some dude on Reddit posted cryptic messages?

Now consider them, hunched over their keyboards, watching a video of Hillary Clinton eating some child’s face. I’m fairly certain that such images will not calm them down.

Anyone with an agenda and some basic knowledge will be able to create an authentic-looking video of the president snorting drugs, soldiers executing civilians, ethnic minorities rioting, and so on.

Or maybe your neighbor with a grudge will make a deepfake of you spewing racist slurs.

The results could sway elections, provoke violence, undermine institutions, or simply get you fired.

It’s no wonder that many political scientists believe that “deepfakes are going to wreak havoc on society,” and that “we are not prepared.”

But on the other hand, AI gives you an opportunity to see a moose on a motorcycle: 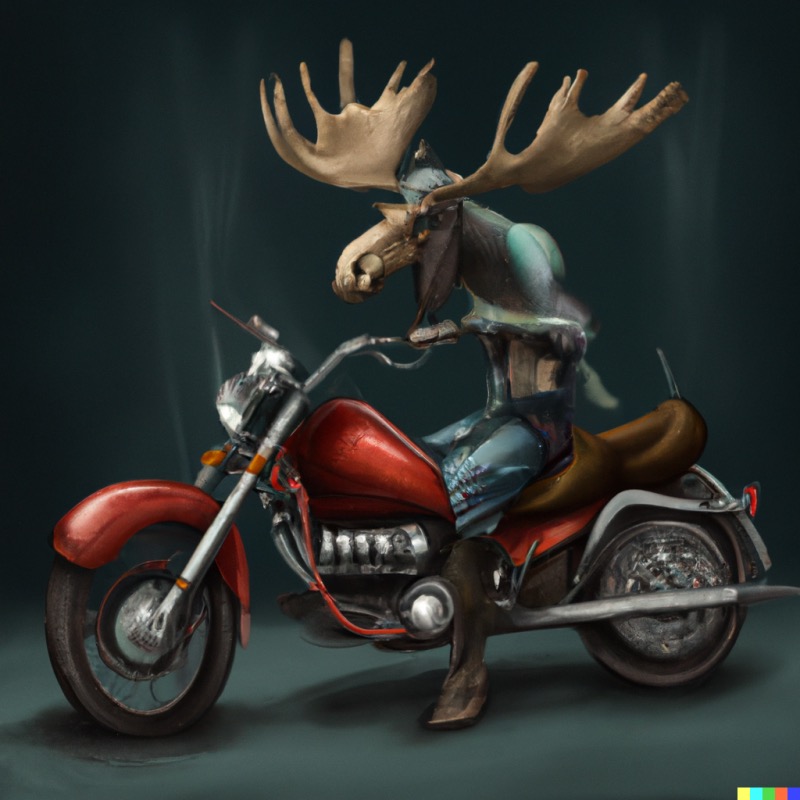 For many Republicans, politics trump conservative principles and objective facts.

With the instability caused by Republican politics being bad for business, we're beginning to see corporate

A chat with Stephanie Manriquez, a writer, radio producer, music selectah and teaching artist based in

So who is Daniel Cubias, a.k.a. the 'Hispanic Fanatic'? Simply put, he has an IQ of 380, the strength of 12 men, and can change the seasons just by waving his hand. Despite these powers, however, he remains a struggling writer. For the demographically interested, the Hispanic Fanatic is a Latino male who lives in California, where he works as a business writer. He was raised in the Midwest, but he has also lived in New York. He is the author of the novels 'Barrio Imbroglio' and 'Zombie President.' He blogs because he must.

Conservatives tend to be rural, uneducated, older, and white, while liberals tend
The rise of authoritarianism around the world, and the solidarity shown between
Cha Sa-soon, an elderly woman who failed the South Korean driver’s test
If, as is entirely likely, Trump wins the GOP nomination in 2024,
Younger people may have been the deciding factor in many races, and