For all you “deplorables” who didn’t get tickets to the Inaugural Ball, here’s your chance to celebrate with the Trump phenomenon himself.

Deplorables Nation, a group describing itself as “the counter cry to Occupy Democrats and Move On,” will usher in the 45th president on January 19 at the Ronald Reagan Building and International Trade Center in Washington, D.C.

The nonprofit was founded by Evelio Medina, president of the Miami Brickell Chamber of Commerce and a “lifetime Republican”, as part of the movement of the discontented that rallied behind Trump.

Oh, and Medina just happens to be an immigrant himself, from Cuba. 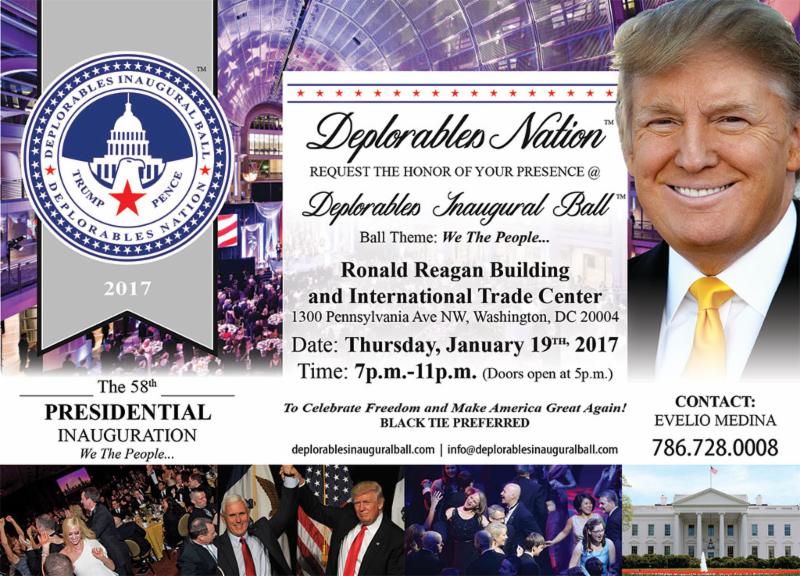 “It’s not an idea, it’s a movement,” Medina said. “There’s a big group of people who didn’t have a tent. Now they do.” Well, after all they’re self-proclaimed “deplorables.” Would you invite such individuals to your event? Apparently so.

According to Medina’s own research, more than 70 million people have used the word deplorables in a positive way in recent months. Medina claims he recognized the “political, commercial and motivational power” of the label as soon Clinton uttered it in a stump speech in New York. He quickly trademarked the term and launched deplorablesnation.com to sell tickets for the inaugural Deplorables Inaugural Ball. Talk about branding!

The ball, “which will be the best of the unofficial balls,” claims Medina, will future musicians Saints of Havana, Lucy Grau, and others. Sounds like they have more acts than the inauguration itself! Plus there will of course be food and a four-hour open bar.

Medina hopes the president-elect himself will stop by. “He owes his election to the deplorables.” 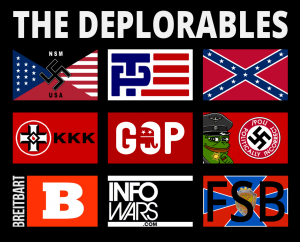 And for those who can’t be D.C., Medina has you covered.

“Our team has created a generous package of commemorative souvenirs, to mark this historic victory so that everybody can feel like they are contributing to this once-in-a-lifetime celebration,” Medina explained. “We are also reaching out to a select group of individuals, associations and corporate partners interested in underwriting and sponsoring this event.”

Medina vows that sales from souvenirs and tickets — $500 each, or $1,000 for VIP seats — and from the online sale of commemorative souvenirs — will go toward advancing Trump’s agenda. “And if he gets scattered or distracted, we are here to remind him,” Medina adds. “Because our agenda is his agenda – America first.”

Medina may be in for a rude awakening.

Hector chats with Todd Miller, a journalist who has covered border security for the past 20

Why are we letting QAnon people off the hook?

Iván el Satánico & the Dark Side of Cumbia

In his first column as Political Editor, Dan Cubias sets the record
Lawyer Roberto Ariel Fernández on what the Puerto Rico Self-Determination might mean
Puerto Rico needs its own Wolfe Tone. It needs another Don Pedro.
Why brands, companies and media should be careful using 'Latinx'
Two stories about solidarity in the face of hatred and power