As a documentary filmmaker, Juan Pablo González has chronicled the life of the residents of his native Atotonilco El Alto, in the Mexican state of Jalisco, in several short films and one feature-length documentary (Caballerango, 2018). His contemplative character studies have been celebrated not only for their austere aesthetic but also for how they subvert our perceptions of rural Mexico. The son and grandson of tequila makers, González possesses a keen sensibility for the quotidian and of those social and economic forces that have changed its residents’ lives.

After deliberately avoiding the subject due to his close relationship to the industry, González centers his first drama, Dos estaciones, on an artisanal tequila distillery run by 50-year-old María García (Teresa Sánchez), the last in her family line of tequila makers.

The film, a compelling hybrid of fiction and nonfiction and shot on and off from 2017 to 2020, opens with a group of jimadores harvesting the agave that will later be cooked and fermented, Gerardo Guerra’s Steadicam panning and moving around the workers as they chop the spikey leaves and the agave is carried away in carts pulled by mules. Their conversation about the fungi plague that is decimating the crops as they eat their lunch has a fly-on-the-wall quality.

That observational approach continues as the camera, shooting from behind her square-shouldered back, follows María as she walks towards the factory (owned by González’s parents in real life) after unsuccessfully trying to get her truck started and later supervises her workers as she firmly gives orders. María is clearly respected and loved by her employees, to the point that they are willing to take a pay cut as the company faces some significant financial challenges caused by the plague and the arrival of hundreds of U.S. companies eager to cash in on the tequila industry. The bills are piling up, and even Mother Nature seems to be against her.

María doesn’t seem to be comfortable in her own skin. She has built this shield around her, repressing her own sexuality, to survive this exceedingly macho industry as one of the few women owners of a tequila distillery. (According to Mexico’s Tequila Regulatory Council, in 2018 only eight percent.) Hers, one suspects, has been a solitary life.

Her community may be appreciative of her contributions to their economic well-being, but at what cost to her? We rarely see her smile or take joy at the smallest things, like having her hair done by Tatín (played by Tatín Vera, an openly transgender woman from Atotonilco who owns the beauty shop where these scenes are shot) or doing donuts with her rented truck in the middle of the fields, lifting thick curtains of red dust while she gleefully laughs like a small kid.

It is at a kid’s birthday party where she meets Rafaela (Rafaela Fuentes), who approaches her in search of a job. Recently fired from a tequila factory where she worked for 10 years, Rafaela brings the kind of experience that could help María get out of the fiscal hole she is trying to dig herself out of.

María can’t pay her a full salary but can offer Rafaela housing and food. This, on the surface, looks like a run-of-the-mill transactional conversation. But look closely at Sánchez’s expression and body movement, at her shy, furtive glances as she speaks to Rafaela. She looks like a teen girl at school trying to ask another girl out.

María takes great pleasure in showing Rafaela around her factory and around town,  andin quietly sharing an office space or even dancing in the kitchen. Hers is a quiet, subdued, and touching courtship—which is why, in a pivotal shot near the end of the movie, as her future remains uncertain, González and Guerra move from a two-shot to a close-up, her emotions quietly bubbling to the surface, her eyes watering as she looks around her and swallows hard. It’s a superb performance from Sánchez, one that won her the World Cinema Dramatic Special Jury Award for Acting at this year’s Sundance Film Festival.

While María is a repressed soul, Tatín is confident in her own sexuality and identity. Accompanied by her mother, she strides with a light step towards the slot machines at the local casino and is somewhat coquettish when Fernando (José Galindo), a local landscape painter, sits at the slot machine next to her and asks for her help. We later see them in bed, making love, the camera at a distance, respecting their intimacy. The following morning they sit outside admiring the landscape, particularly a hill nicknamed “the Sleeping Lady.”

Later in the film, Guerra’s camera follows Tatín from behind as she walks around town, shopping for the evening meal, but instead of the more rigid center-frame shot he uses for María at the beginning and end, the framing is here looser, more open. Her step is lighter, more full of joy than María’s more rigid, almost militaristic stride. 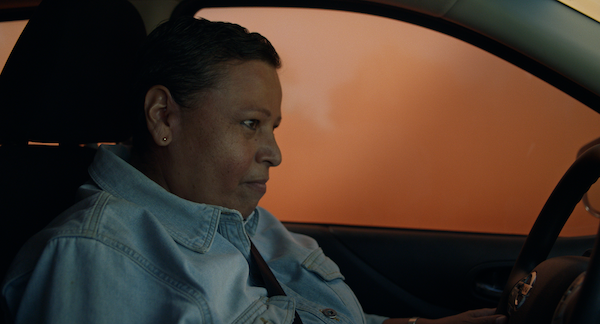 What is even more striking about these two scenes with Tatín is how at ease, how comfortable the residents of Los Altos are with her. There’s none of the hyperventilating panic you hear about when the word “trans” is mentioned in this country, but instead a neighborly embrace of her identity—although one also wonders how much Tatín had to struggle to earn that respect). This is just one of the many ways that González and his co-scriptwriters Ana Isabel Fernández (González’s wife) and Ilana Coleman subvert our preconceptions of rural life in Mexico.

González scores his political points not by hitting us over the head with them but by delicately weaving them into the narrative, by listening to his characters and to the landscape, by discreetly observing them and letting them and their story breathe. It feels authentic thanks in great part to the movie’s non-professional actors who play fictionalized versions of themselves and contributed to the script. That fusion of the fictional and the real—a dominant trend in world cinema today—pays off enormously, as we leave the theater believing we know these people and this town. We admire their tenacity and even cheer when one of them commits an impulsively destructive act.

Dos estaciones is a stunning work of art.

Dos estaciones is currently playing at the IFC Center in New York and opens in Los Angeles at the American Cinematheque and in Chicago at the Gene Siskel Film Center of the School of the Art Institute on September 16, followed by a national rollout.

My grandma votes Republican because she believes in three things: money, strength, and the rule of

GOP Outrage Is a Never-Ending Cycle

Republicans have railed against Obamacare, the changing of the names of D.C.'s football team and Cleveland's baseball team, and, most … More

By skipping through its emotional content for the sake of big-screen excitement and reinforcing a patriarchal message at the end, … More

Alejandro G. Iñárritu's 'Bardo: False Chronicle of a Handful of Truths' and
By skipping through its emotional content for the sake of big-screen excitement
November is a huge month for Latin American and Latino cinema in
The four-part Netflix documentary 'High: Confessions of an Ibiza Drug Mule' highlights
Film critic Alejandro A. Riera speaks with Rodrigo García, director of 'Raymond