Memory House (Casa de Antiguidades), João Paulo Miranda Maria’s feature debut, is the latest Brazilian film about that country’s racist, colonialist and xenophobic legacy to reach these shores. And even though the movie was conceived before President Jair Bolsonaro took office, much like Kleber Mendonça Filho’s and Juliano Dornelles’ Bacurau (2019), Maya Da-Rin’s The Fever (2019) and Lázaro Ramos’ Executive Order (2020) before it, Memory House, like its three predecessors, speaks to the moment. All four films use elements of the fantastic to explore its themes. But while Bacurau and Executive Order are clearly dystopic tales that, to a certain degree, follow that genre’s conventions, Memory House, like its spiritual twin The Fever, uses magical realism as a metaphor for rootlessness and the loss and reclaiming of identity in a hostile, dehumanizing environment.

Both films’ protagonists have to endure the indignities of a monotonous job as well as a sense of isolation and the fact that something out there is calling them to reclaim their roots. In the case of Da-Rin’s Manaus-set feature debut, that someone is Justino, a member of the Desana people who works as a security guard in Manau’s docks and is haunted by the news of strange animal attacks and the sounds coming from a forest near the ramshackle house he shares with his daughter.

Cristovam, Memory House’s protagonist, is Afro-Indigenous (although Miranda Maria does not provide any details about his family background), the only person of color working at a milk factory and one of three people of color living in the mostly white southern town founded by Austrian and German immigrants and which seems to be under the control of one family, the Kainz, owners of that factory. The milk factory’s machinery may very well come from the future and Cristovam’s white work uniform may resemble a hazmat suit—the factory’s bright lighting scheme isolating Cristovam even more—but the town itself, and its residents, seem to be adrift in time. No one uses cell phones, and computers are MIA from the factory owner’s office.

The film’s story properly starts when Cristovam (Antônio Pitanga, a veteran of Brazil’s radical Cinema Novo movement of the ’60s and early ’70s) is called into the owner’s office. After a long speech in German and Portuguese—condescendingly translated by his right-hand woman—in which he extols the innovations his European forefathers brought to this land, the owner informs Cristovam that due to the economic crisis “adjustments” will have to be made to everyone’s pay and that as an “old and black man, where would he get a better option?” From this point forward, Cristovam will quietly endure and bear witness to a new series of small indignities that will continue to chip away at what little dignity he has left: white neighborhood kids shoot at his three-legged dog with a pellet rifle; in arguing that they pay more taxes than the rest of the country, a supporter of the region’s campaign for independence from Brazil rails against the North (i.e., people of color) for their “laziness” at a factory town hall meeting Cristovam is forced to attend; and he observes how Jennifer, a young Afro-Brazilian, dresses herself in tight fitting clothes for the white men who frequent the only local bar (“At least she’s blonde,” one of them remarks, pointing out her dyed curly hair). 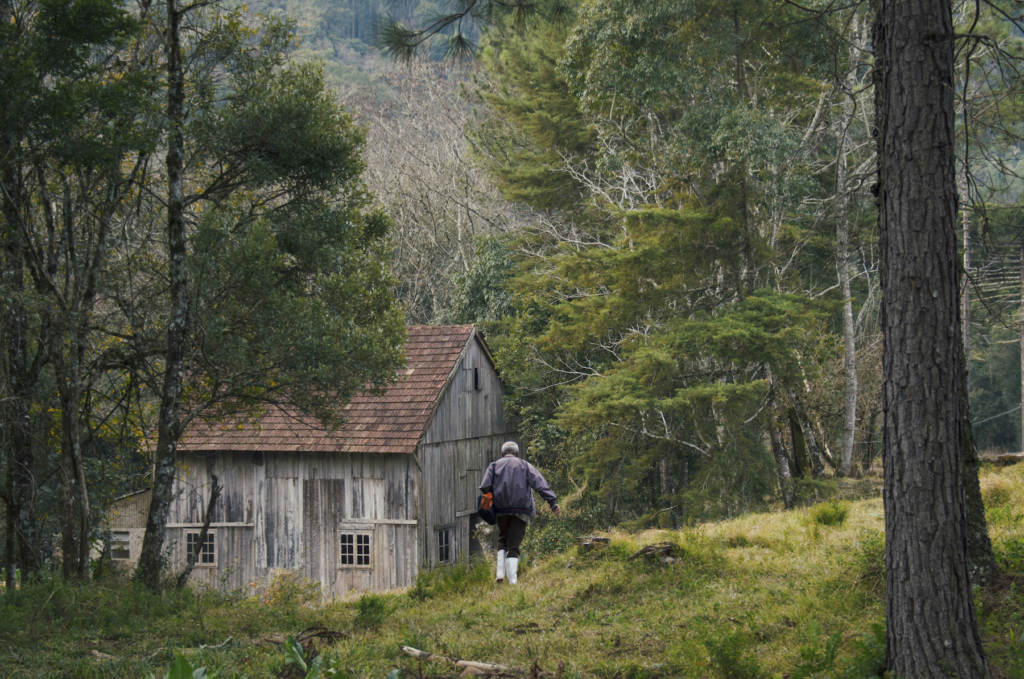 The memory house of the title lies but a couple of steps away from Cristovam’s own, an abandoned house full of detritus and racially and sexually denigrating graffiti. It’s also a gateway to the past: as Cristovam enters it for the first time, candomblé music fills the soundtrack; he finds a spear among the debris and the spirit of a jaguar appears. And previously, as he walked past it, he could see through one of its windows a room full of lit candles and an altar. Cristovam claims the house as his own after the white teens maim his dog and he is forced to kill it; he ends up killing one those kids with that spear after mistaking him for the jaguar. Cristovam begins to see bright yellow pinpricks of light in the eyes of several characters, including Jennifer. And he fine tunes and plays a long wind instrument in the shape of a horn which he at first plays discordantly at the bar and then in tune to a herd of cows. He identifies with those cows so much that towards the end he dresses up in a folkloric cow costume he finds in the house. (One scene involving the auction of a bull using language similar to that used by auctioneers in the 16th, 17th and 18th centuries as part of the slave trade comes out of nowhere, almost as if Miranda Maria didn’t trust his audience’s ability to connect the dots.)

Cristovam may believe that these costumes, these artifacts, will turn him into some sort of folkloric hero out to avenge the sins of the past, but instead they mark the end of a long, humiliating, dehumanizing journey. Unlike Justino in The Fever, he has no family, no community, no support group to turn to. And when he comes close to finding one, he destroys that support group with one literal blow. Unlike most mainstream films, the forces from beyond won’t rescue him and revenge shall never come. Cristovam is the last black man standing in a land of white supremacists. 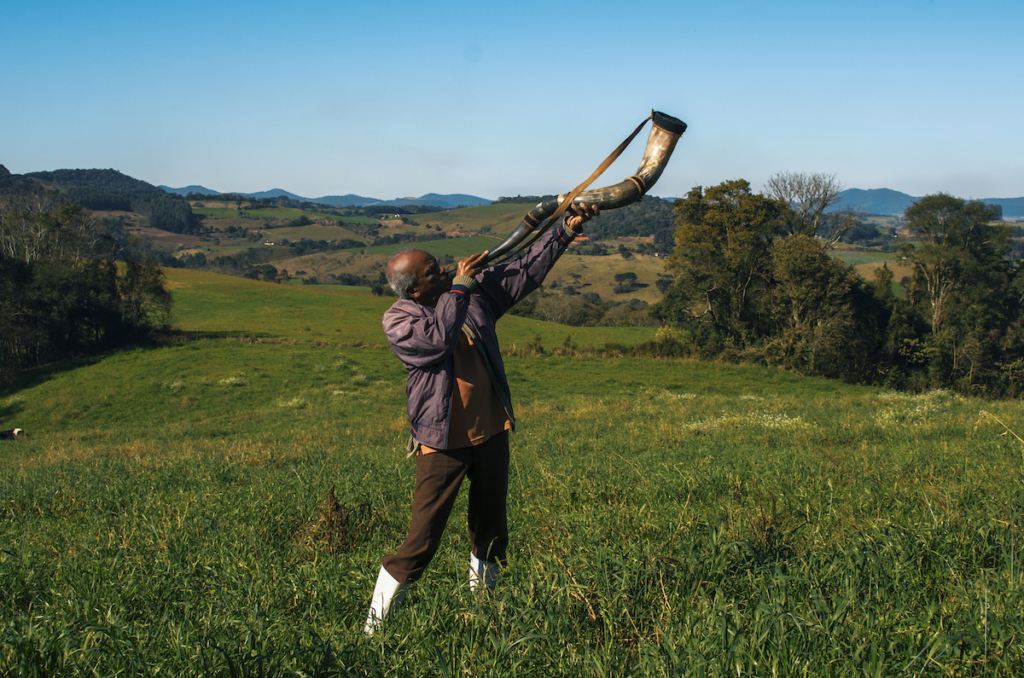 Benjamín Echazarreta’s (A Beautiful Woman, Gloria) photography has an incantatory quality, his camera constantly and slowly zooming into Cristovam whether he has his back towards the camera or is facing it. By keeping him center frame, Echazarreta further underlines his isolation. And much like Regys Myrupu as Justino in The Fever, Antônio Pitanga lets his body, his silences and his gaze speak louder than the scant dialogue written for him. You feel the weight of decades of indignities and insults hurled at him as he moves across the screen, as he sits down, sometimes hunched over the table, and on his wrinkled face.

And yet, no matter how committed Miranda Maria is to his vision, and its hypnotic effect over the viewer, Memory House left me quite underwhelmed towards the end, especially when compared to the one-two punch of the more collective Bacurau and Executive Order and the far more contemplative and culturally rooted The Fever. By placing all the weight of Brazil’s racial and colonial past one man’s shoulders, Memory House ends up being too schematic. And yet, you can’t turn your back on this portrait of a man ground down by years of institutional racism. It lingers in your memory.

Memory House opens Friday, September 3, in select theaters, followed by a national rollout over the following weeks. For a full list of theaters and virtual cinemas, visit www.filmmovement.com/memory-house. The virtual screenings are not geo-tagged, so consumers can buy the “ticket” for any theater from any part of the country. The proceeds from your streaming rental is shared between Film Movement and the presenting art house movie theater of your choice, so all ticket purchases help support independent cinema.

The Role of Good Explanations

All explanations are not equal … More

Fernando Trueba’s latest film, 'Memories of My Father' (El olvido que seremos), has
Alejandro G. Iñárritu's 'Bardo: False Chronicle of a Handful of Truths' and
By skipping through its emotional content for the sake of big-screen excitement
November is a huge month for Latin American and Latino cinema in
The four-part Netflix documentary 'High: Confessions of an Ibiza Drug Mule' highlights