Today, almost five years later, the secret’s definitely out, and our favorite brunch spot regularly has long lines on weekends. But the initiated gladly wait. 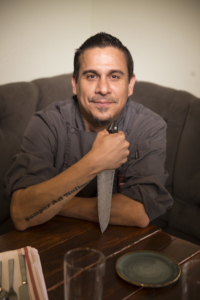 Born and raised in El Paso, Texas, Chef Javier studied at the Culinary Institute of America in San Antonio, before graduating from Le Cordon Bleu in Paris, the Oxford of the culinary world, leaving with its highest accreditation, the hard-won Grand Diplôme. Out of a class of 138 students, he was one of only three Americans in the program, and among the only eight people in total to graduate.

Since then he’s worked at a number of restaurants, mostly around the Vegas Valley. He began at Wolfgang Puck’s Postrio—not a bad start. At the age of 25 he became executive chef at Tremezzo at the former Aladdin. He served a handful of other tours—Mi Casa at the Silverton, Mercadito at Red Rock Resort, Brookyln Bowl at The Linq, Whist Stove at The District at Green Valley Ranch—before striking out on his own, opening Kitchen Table in 2015.

My wife and I didn’t know any of that before our first visit in 2016. We’d simply gone there to try the chilaquiles.

My wife’s a bit of a chilaquiles connoisseur, having eaten them all over our hometown of Chicago, across the country, and back in her native Ciudad Juárez. Her devotion to chilaquiles is one of the first bits of trivia I learned when we began dating. Being from Chicago and a Juarense, she typically prefers her chilaquiles smothered in salsa verde and queso Chihuahua.

Today Kitchen Table offers the option of either red or green chilaquiles, but during our first visit they only offered red. Add to that the fact that their chilaquiles feature braised pork belly—a staple across the Southwest, but a bit exotic back in Chicago, where carne asada comes standard—I could see my wife preparing for an aggravating disappointment.

The pork belly is so tender, so juicy, the black beans stewed to perfection, and everything sprinkled with Oaxacan cheese, drizzled with crema, and topped with an egg—which you have to order sunny-side up, by the way, or over-easy at most. Asking for scrambled eggs with your chilaquiles is like ordering a burger well-done—both severe crimes against nature. You need that yolk to seep down into the beans and the sauce and the tortilla chips. If you don’t enjoy mixing flavors like that, then you might as well stay home and eat confleis.

My wife is the type of woman who knows what she likes and never sees any reason to venture off her beaten paths, so she always gets the chilaquiles, rain or shine (it’s always sunny in Sin City).

Me, I’m an explorer at heart, and over the years I’ve tasted other offerings from the menu.

For starters there’s the empanadas made with squash, corn, roasted poblanos, Oaxacan cheese, salsa verde and salsa árbol, and crema. Or the breakfast taquitos made with pickled jalapeños and bacon.

The “Egyptian” is sort of a classier version of avocado toast, made with Middle Eastern condiment duqqa and topped with greens, bacon and poached eggs.

The pork belly green chile is a popular dish, and is almost like the chilaquiles, only with potatoes instead of beans and smothered in salsa verde.

The chorizo omelet has roasted poblano peppers, plus the Oaxacan cheese, the crema and the potatoes, because why mess with a good thing.

They serve a crab po’boy made with blue crab, avocado, greens, whole grain mustard, on a toasted hoagie roll.

They’ve got a chorizo crepe with the roasted poblanos, Oaxacan cheese, crema, plus salsa árbol.

There’s the salmon benedict with pickled red onion, the country Benedict with country fried steak and chipotle gravy, and the pork belly Benedict, my personal favorite, made with chipotle barbecue sauce, a jalapeño hollandaise, and served with a side of potatoes.

You can’t really go wrong with the menu at Kitchen Table, though looking around at what other people are eating is likely to induce an acute case of FOMO.

Then there’s the savory sweet side…

My 16-year-old stepdaughter is waaay too cool to go to brunch with her parents, but she usually asks that we bring her back an order of the warm, sweet, ooey-gooey monkey bread—that is, if they have any left by the time her mom and I stroll in for a late brunch around 1:30. In which case she might request the Nutella French toast, made with challah bread, a graham cracker crust and a marshmallow glaze. Or the s’mores crepe, with Nutella, bananas, roasted almonds, and some more of that marshmallow glaze.

My absolute favorite item on the menu, what keeps me yearning for brunchtime and has me forgoing sweets all weeklong, is their buttermilk pancakes. I know we’ve all had good pancakes, and plenty of bad ones, too. Pancakes serve an essential starring role at any decent brunch spot. But if there are softer, better tasting buttermilk pancakes in the world, I’ve yet to taste them.

These pancakes will make you feel like a kid again, as if you were tucking into a stack for the very first time. They’re sprinkled with powdered sugar, topped with a dollop of savory whipped cream, and served with Nobel’s handcrafted maple syrup that seems as though it were concocted specially for these bad boys. A match made in heaven.

I take that back. I don’t think heaven itself serves pancakes this good.

I come from the food and drink capital of the world. Eating, in Chicago, is a religion, and restaurants are places of worship, where people go to commune with each other and the fabric of life itself. When I think of Chicago, I think of those sanctums of gastronomy without which Chicago wouldn’t be Chicago, but more like Milwaukee or Cleveland.

So when my wife and I arrived in Vegas, we were in desperate need of a new church.

Kitchen Table is one of only a few places in the Vegas Valley that remind me of home, and by far the only brunch spot that does. It’s the feel of the place; the hip, friendly staff; the speciality coffee drinks—my wife has settled on the honeycomb cappuccino, while I’m stuck on the crème brûlée latte—which come in huge round mugs, just like Café Con Leche in Logan Square. Only Chef Javier’s recipes are far beyond that of any breakfast spot I’ve ever been to back in Chicago.

I look back on my days in Chicago and think of the handful of truly great food joints that still shine brightly like stars in my fading memory. My wife and I already agree that, if and when we leave Vegas for some new place to call home, we will in the same way remember the special meals at Kitchen Table.

And just as we make a beeline to our favorite spots whenever we touch down in O’Hare, the food, the drinks, the people and the overall vibe at Kitchen Table will forever call us back.

I watched 145 films last year. But since I have yet to see some of the

Hector is the founder and editor of MANO magazine as well as the host of the LATINISH podcast. A Chicagoan living in Las Vegas, he's also the senior editor of Latino Rebels as well as a former managing editor of Gozamos, an art-activism site based in his home town. He was a columnist at RedEye, a Tribune-owned daily geared toward millennials. His work has been mentioned by The New Yorker, Good Morning America, TIME and other outlets, and his writing was featured in Ricanstruction, a comic book anthology whose proceeds went toward recovery efforts in Puerto Rico. He studied history at the University of Illinois-Chicago where his concentration was on ethnic relations in the United States.

It is from a germinal line about silencing those who resist stereotypes
John Murillo’s 'Kontemporary Amerikan Poetry' does what all great poetry should: it
'Postcolonial Love Poem' is a stark reminder, a much-needed one, of the
In his new book, scholar Javier A. Hernández shows how a sovereign
If you can be a capitalist and journalist with no risk to