Gringa is a five-piece Worldbeat band based in San Francisco, CA that weaves infectious rhythms from Brazil and the Americas with a unique sound that lyrical content that questions the status quo. Gringa’s thought-provoking original songs in English and Portuguese, highlight a female-dominated lineup challenges patriarchal norms and stereotypes.  While many lyrics contain tongue-in-cheek humor, others address serious themes of love, loss, and social and eco justice.  Gringa is a self-proclaimed artivist aiming for inclusiveness and internationalism, whose music connects with people, and connects people together, dismantling bigotry one beat at a time.

Fronted by Maya Finlay (sound engineer, singer, and guitar/cavaco player), the all-female quintet released their latest album Letters from A. Broad, artfully bending both genre lines and traditional gender expectations once again. To discuss this production, Maya explains their activism and story behind the album.

Marlena Fitzpatrick: Let’s talk about your stage-name Gringa: “The name Gringa is a pie in the face of US exceptionalism and imperialism, an antithesis to xenophobia, and the band’s female-dominated lineup is a direct challenge to patriarchal norms and stereotypes.” What inspired the band to adopt the moniker? Is music or Latin music still male-dominated? How can we counter-balance this norm? What are the main stereotypes you’re challenging?

Maya Finlay: Gringa felt like the best name for this project for a number of reasons. First, it’s an honest and concise way to describe the music: original songs that merge Brazilian and US styles through a non-Brazilian, non-traditional, female filter. (In Brazil, gringa refers to any non-Brazilian woman.)  Secondly, it conjures up themes of travel, immigration, and cross-cultural connections, which are strong interests of ours, and it does so with a humorous tone, which matches some of our songwriting and reflects our playful nature. Finally, it’s our way of poking fun at US exceptionalism, and an attempt to bring the collective white US nationalist ego down a notch.  Also, calling ourselves Gringa is owning up to our position as outside appreciators of Brazilian music, instead of pretending to be something we’re not.  It’s like the anti- Rachel Dolezal.

Yes, I know music and Latin music are still very much male-dominated, because I do live sound for a living and I mostly work with men, both onstage and off.

There are many things we can do to counterbalance this.  First, it’s important to acknowledge, highlight, and document female artists and their contributions to the music industry, like you’re doing, because often they seem to get lost.  Second, we need to stop describing music made by women like it’s a genre in and of itself.  “All-female” or “female-fronted” are not genres.  Going along with that, we need to provide more space for women and non-binary artists on festival bills and record labels.  It seems there’s this weird idea that you can have too many female artists on a bill, that unless it’s a “women’s festival” or an “all-female-fronted-acts bill,” there are limited festival slots for female-dominated bands, yet never a cap on slots for “all-male” bands.  We should encourage young girls to pursue playing and writing music more, which we can do by supporting organizations like Girls Rock! Camps, and by showing girls examples of women doing that work.  In addition, on a broader societal level, it seems women still (not always, but typically) do the bulk of unpaid labor, like caring for children, elderly, and domestic chores, which reduces their opportunities to just play around and develop music skills that require a lot of free time to master.  Finally, pretty much every aspect of the industry is dominated by men – labels, venues, studios, music tech companies, etc. – so women need to keep infiltrating these circles and influence decision-making and industry culture.  The most well-known music magazine, Rolling Stone, rarely puts women on their covers (they didn’t put one solitary woman on their cover in the entire year 2016), and even when they do, they’re often not musicians, but celebrities like Kim Kardashian.  So we obviously have a long way to go.

Because there are far fewer women in bands than men, and those who are in bands often are vocalists, we are challenging the stereotype that women aren’t competent instrumentalists.  Not only are we all instrumentalists, but Kate Pittard is a master soloist who wails on her sax, and Jenelle Roccaforte is a skilled shredder on her bass. I think this stereotype is particularly strong in Latin music.  For example, I met a guy in a music shop in Brazil who said, “I know you’re not Brazilian because Brazilian women don’t play cavaquinho”.  Why don’t they?  It makes no sense. Also, Brazilian music is not very well known to younger people in the US, so our knowledge of and interest in it and the Portuguese language subverts expectations, and pleasantly surprises Brazilians.  Finally, I produced our first EP and did most of the engineering on it, which flies in the face of assumptions that women aren’t engineers or aren’t interested in production, and challenges the myth that female songwriters need a male producer to help them realize their vision.

Marlena Fitzpatrick: The male domination in the industry definitely must change. We must take charge and challenge this norm. You also challenge some patriarchy with the album’s title: “Letters from A. Broad.” There’s a sense of humor, that also carries a deep serious meaning. Why the title?

Maya Finlay: We wanted the album to reflect some of the lightness and tongue-in-cheek humor of the songs on it. Basically the album was to feel like a series of journal entries in the life of a young woman living abroad, straddling cultures, and starting to discover herself and her place in the world. The term “Broad” is self-effacing, like gringa, to show that we have a sense of humor and don’t take ourselves too seriously.  The use of the word “Letters,” instead of an updated form of communication, was a nod at my increasing interest in a slow-tech movement. The band name and album title often make people laugh, or at least smile, which I think is great because before they’ve heard the music, or even if they don’t like the music, we’ve already given them a positive experience, even if just for a moment.

Marlena Fitzpatrick: It sure is humorous and deep at the same time. For example, the songs “I’ma Build a Home” and “All About Cheating” challenge the usual romantic love song format coming from a female singer, songwriter. They’re upbeat and definitely bring people to the dancefloor. It breaks the “girly-girl” stigma. Was this intentional?

Maya Finlay: That’s an interesting perception. No, it was not intentional.

“I’ma Build a Home” was one of the first songs I wrote and I was still finding my voice. I actually wrote it as a shy guitarist from the perspective of my ex-boyfriend in Salvador, Bahia, so that’s probably what puts a different spin on it compared to other female singer-songwriters. I’m a huge Jorge Ben fan, so I naturally put the infectious samba-rock rhythm to it, to keep the Brazilian vibe, even though the lyrics are in English.

“All About Cheating” was a song Kate Pittard wrote years ago as a quirky and satirical blues song. She brought it to the band and we turned it into a funky ska and one of our best crowd-pleasers.

We all love playing for a dancing crowd, so it was only natural for us to want to write and play songs that would make people dance.

Marlena Fitzpatrick: Now, “For Foreigners” plays with sexuality and multicultural acceptance of some sorts. The fetish is having a foreigner. Is this a humorous, sexy approach to tackle inclusiveness?

Maya Finlay: Absolutely. It actually started out pretty autobiographical; I was sort of writing it to make fun of myself and the patterns I had noticed in my dating life. But it’s certainly a celebration of diversity and the fun of meeting and interacting with people of different backgrounds and perspectives. It took on a new meaning after the last election, and I started to understand it better as a tool for chipping away at xenophobic attitudes. The silliness is therapeutic because, in times like these when it feels like the world is falling apart, if you’re not laughing, you’re crying.  I suppose it’s also a celebration of female sexual empowerment, but I feel like that’s been established and isn’t as taboo as it used to be.  This one is often a fan favorite and one that many people, both men and women, have told me they relate to.

Marlena Fitzpatrick: And on the note of empowerment, as artivists, what’s the cause you’re most passionate about?

But to choose one, I would say that almost every issue can be traced back to perverse, crony capitalism and the corporate oligarchy that pulls the strings of our political puppets via lobbyists and special interest money.  I think unfettered corporate greed and the power it has over our government to shape policies and the future is the most pressing issue because it affects everything and everyone, and yet is overlooked because of convenience, corporate media and mind control. We give our money to large corporations who then use that money to lobby for the interests of the wealthiest elite, directly against our own best interests, and we wonder why things are getting worse. Only 5 men now own about as much as half the world’s population, yet we keep on blaming each other for our problems when we should be holding them, and the systems that allow them to accumulate so much of the world’s wealth, accountable.  I truly think focused, sustained boycotts against the most dangerous, regressive and invasive corporations would be an extremely effective, non-violent form of resistance.

Basically I think the US needs 3 things to start getting on the right track: A cultural revolution that shifts the collective mindset away from excessive consumerism and violence, and towards valuing sustainability, truth, justice, and basic human rights. Second, it’s imperative we get money out of politics (perhaps by clamping down on lobbyists, reinstating the Glass-Steagall Act and ending Citizens United as a start).  And third, we should eliminate the Electoral College and give each citizen an equal vote – one person, one vote.  Our election system is an embarrassment.

Marlena Fitzpatrick: Wow! “perverse, crony capitalism and the corporate oligarchy that pulls the strings of our political puppets via lobbyists and special interest money.” Thank you for your musical gift and for being an agent of change. 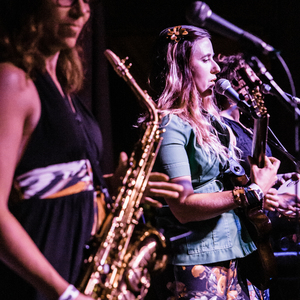