I am someone who appreciates the city of Chicago, lo bueno y no tanto lo malo, and so it is quite meaningful to hear great thoughts spoken about the city by others. In this case, Rodrigo Guardiola of the band Zoé, shared his heartfelt appreciation for Chicago where they will launch their U.S. tour… today!

Yes, Chicago is chaotic and most of the time that is the only thing highlighted about this multifaceted metropolis. Chicago is also revolutionary, tight-knit and powerful. It’s exploding with culture. We are abundant in art, music and love–plus violence and despair, but this is not about that.

There’s an energy, un frenesí, in Chicago like no other. Maybe it stems from the long icy winters and the too-short summers. 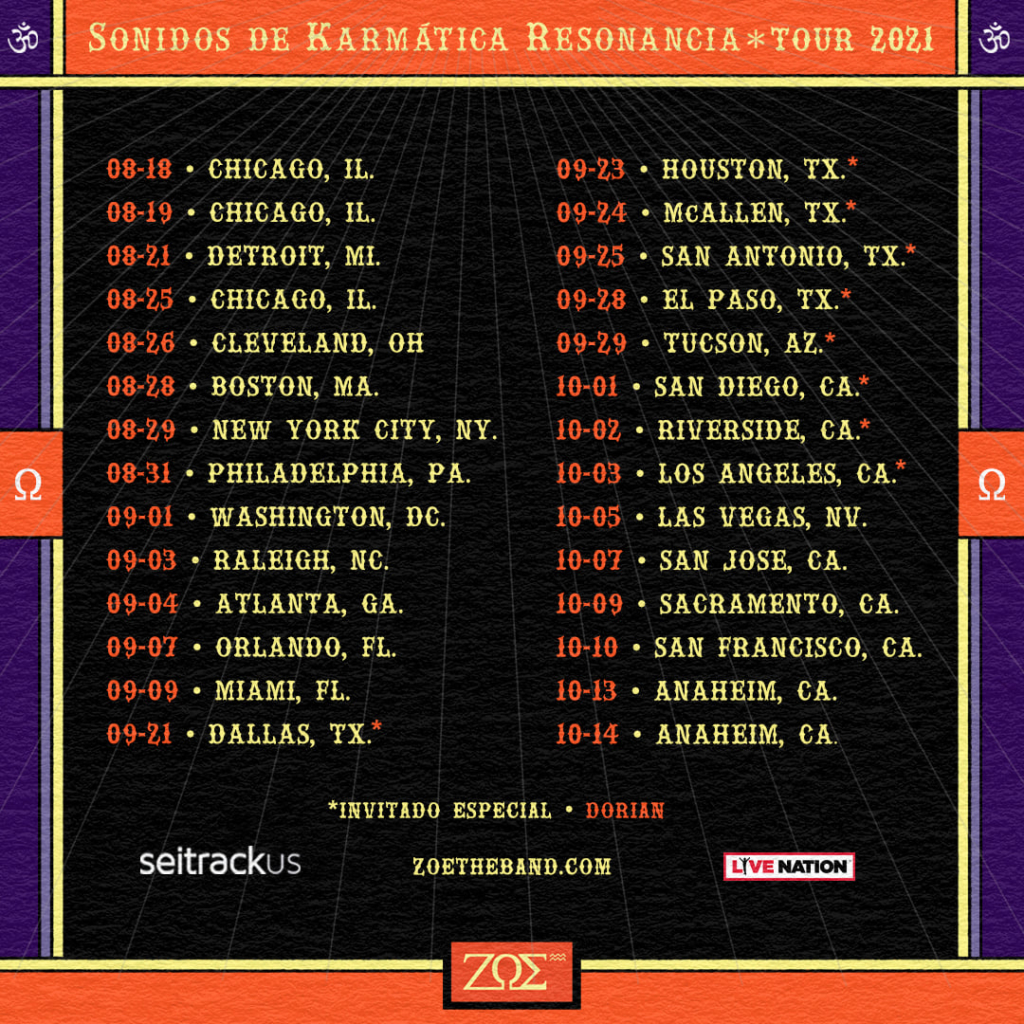 So it was a huge feel-good boost to hear all the great things Rodrigo had to say about Chicago. He is in the city this week, and next, with his bandmates and performing three concerts at House of Blues on Wednesday, August 18, Thursday, August 19, and a third show on Wednesday, August 25. They are celebrating their new album, Sonidos de Karmática Resonancia.

Rodrigo went on to tell me how happy he was that this tour, one happening after the longest break they’ve ever had as a band, was starting in Chicago and with three shows.

“You are in Chicago, correct?” Rodrigo asked me to make sure. “Well, you are where we are going to start the tour and fortunately we got a very incredible city because Chicago, I would dare to say, is the first city where we had sold-outs and some memorable shows.

“This all happened during the first stage of us touring through the United States, a very adventurous one. It was around 2006-2010, during the phase of our music career that was rough, definitely our most rocky period. It’s when we did all kinds of shows, however we could do them, and not necessarily in the best conditions, or even with all of our own equipment. These were the days when we were all squeezed into a van. It was when we shared equipment with other bands, and we either headlined a show or opened for another Latin band. This was how it was many of the first times we went to Chicago, and to Texas and California.

“It all started in those three points and Chicago, being in the middle, well, not really the middle but not being on one coast or the other, you’re in this… it’s a different sensation for Latinos. I feel how the Latino community has grown on each coast. They each have their own culture that’s East or West Coast and in Chicago there’s a Mexican and Latin American community that has become so… like a shake. It is different. It has another energy. It’s a completely different culture that’s so cool. 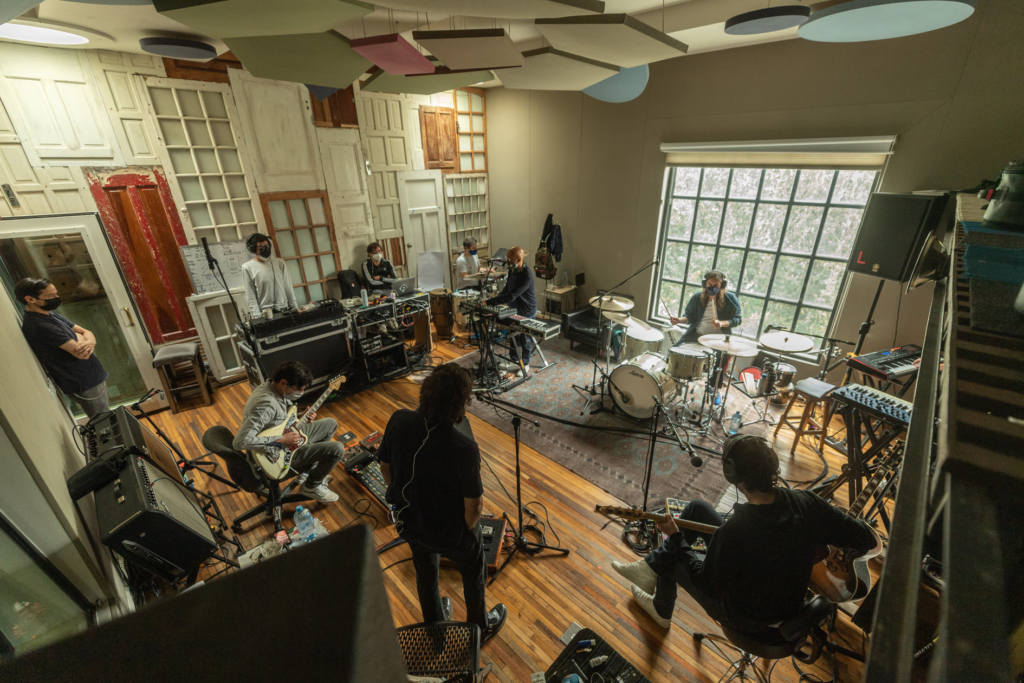 “And there’s a Latinx festival in Chicago that’s very important and that we love to be a part of when we’re invited to play, and we know there’s Lollapalooza, but this other Latinx festival keeps growing and growing and we have realized there’s this eclectic Latin-American culture. Everyone is kind and so passionate and enthusiastic about this culture and that, in turn, makes us so excited that we get to start such an emotional tour, after the longest break we’ve ever taken in our career, here in Chicago.

“Then, to be able to share this album, one that we’re so excited about and that was made in a very different situation than any other album… I think we still can’t imagine how nice it will be to be back and to be there sharing it with the people of Chicago who saw us grow from zero to where we are now.

“We are very grateful to the city and to this Latin audience that we have felt very close to and who has made us part of their history.”

Rodrigo is also involved in cinematography and in 2018 debuted the documentary Panoramas. In Chicago the film premiered at the Music Box Theater, which Rodrigo was so happy to discuss.

“It was amazing. You know, I got on the mailing list for the place. I became a fan of that theater and even though I’m not in Chicago I like to see what movies they program and I was watching how that theater did a lot of things to keep going during the pandemic. They did screenings of classic movies in some courtyards and parks. They have great programming.

“I’m looking forward to it. Now that we’re going to have days off in Chicago, I want to go to the Music Box and see some films. My respect to that kind of movie theater and all the ones that managed to survive this year and a half of the pandemic because those theaters, this one, have all the cool vibes, really. If I lived in Chicago I would go as much as possible. I was so proud that my film was screened there.”

Rodrigo was able to work on a film during the pandemic with Gabriel Nuncio which will screen later this year on Netflix. In the meantime, Rodrigo and his bandmates will be on a 26-date tour that begins tonight in Chicago and ends in Anaheim in mid-October.

Zoé’s new album, Sonidos de Karmática Resonancia, is one of their best because it shows the many ways their sound has evolved, which seems to be an elusive idea for so many others. Zoé creates transcendental sound experiences. They continue to highlight the electronic pop elements that makes their music so likeable while revving up bold melodic vibrations.

Off this album, “Velur” is one of our favorites because it takes on the spirit of a song from the ‘90s Pretty In Pink soundtrack and I love them for it.

Guitarist Sergio Acosta explains, “You can hear in these new songs the grand total of my influences. From the albums by Pink Floyd and The Cure that I treasured at 16, to the Turkish music and contemporary rock bands that I’ve been listening to during quarantine. There are also snippets of some trusted classics: Nina Simone, Donovan, Johnny Cash.”

Although we love the classics, we’re thrilled that Zoé gets to share new songs like “Karmadame,” “Popular,” and the flick-on-the-lighter song, “Canción De Cuna Para Marte.”

In press material for this album, vocalist Leon Larregui says, “It was only a couple of weeks ago that [guitarist and co-founder] Sergio Acosta sequenced the songs and I got to hear the entire album as a whole. For the first time, I got a clear vision of what we had achieved in these difficult times. I think it’s one of our best albums. You can definitely hear a more mature Zoé coming through.”

“I spent years dreaming of recording an album like this one,” says Acosta. “And you know what makes it so special? The beauty that it’s still the five of us—playing together after so many years.”

In 'Cry Macho,' director and star Clint Eastwood returns to his recurring themes of Mexicans and

A chat with Mexican rock band Zoé on how Chicago has played such an important role in their history, including … More

Senate Majority Leader Mitch McConnell has some explaining to do. … More

Silvana Estrada just released a new single and video for “Tristeza” and
Puerto Rican-Cuban singer-songwriter and multi-instrumentalist Xenia Rubinos plays with audiovisual storytelling in
Demonstrating their commitment to honoring traditional Latin music, Dos Santos' new song
DJ Jigüe takes us into the world of tropical Afrofuturism with his
Musaraña, a project by María Laboy and Andres Rigau, is a surreal