Be an ally or stay out of the way. This isn’t a one-time thing. This is our reality. And I, for one, am gonna be all Lupita D’Alessio in ‘Mudanzas’ about it.

From Los Angeles to New York, and everywhere beyond and in between, millions of women and allies gathered to march in protest of the country’s new administration. Reacting against oppressive leaders and their harrowing legislation – which has already begun rearing its ugly head as Reuters reports that all information related to climate initiatives, healthcare coverage for all and LGBTQ rights have been deleted from the official White House website – women joined to voice their disappointment of the circus at the helm. 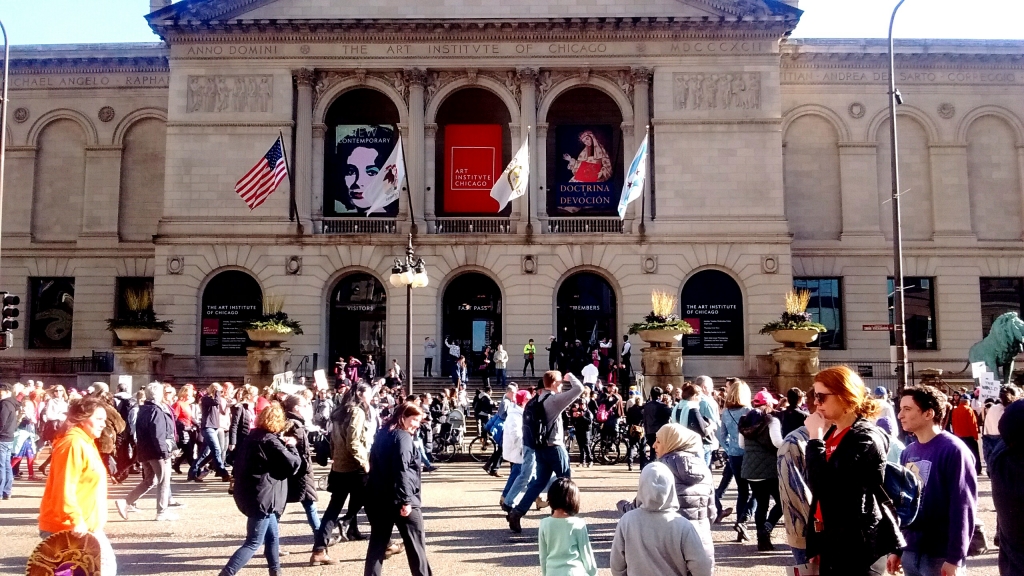 As a woman, and an advocate for equal rights, I feel the need to share a story, one that some of you may relate to or at least empathize with. My purpose is to make a connection and, today, as I marched along with hundreds of thousands of Chicagoans, I was once again reminded that the more we know each other’s stories, the more we are able to understand each other, manifesting itself as empathy, sympathy and encouragement. Understanding each other’s personal stories makes it easier to forge indestructible bonds built on solid foundations with the possibility of an infinite renewal of purpose, passion and dedication. 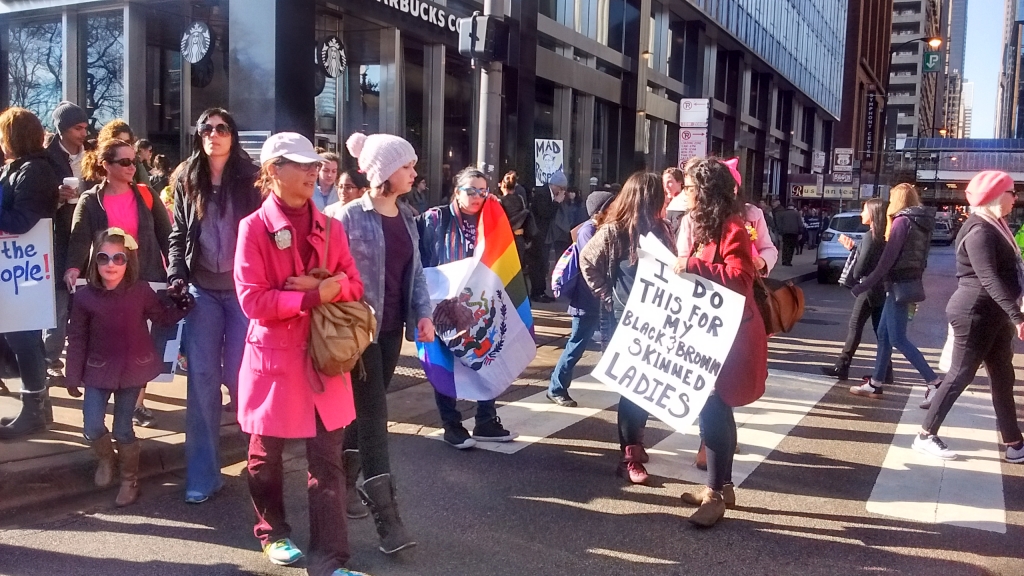 As a woman, I have experienced the shame of being treated as inferior because of my gender.

One of my first setbacks happened as a teenager at the church my family attended in the small Houston suburb of Pasadena. At that age, I guess I was content with my role in the church. I got to participate in all types of ministries, including the door-to-door knocking made fun of on so many memes, but I always wanted to do more. I didn’t like that things felt like a chore instead of a blessing or something I was passionate about. I wanted to feel something, a connection.

At our church they had a sound system which included the task of passing around a microphone throughout the congregation whenever the elder at the podium asked a question during one of our weekly meetings. That is what I wanted to do. I wanted to pass around the mic and control the on/off switch after each answer. I thought it was sooo cool and I got really excited. I was actually feeling something.

So, one day after a church service I approached the brothers that were in charge of the sound system duties and asked them if I could start helping with the microphone. They sheepishly hid their grins and quickly said, “That’s a responsibility for a brother, not one for the sisters.”

I distinctly remember my face feeling hot. I felt like I had been slapped on the face as a form of waking me up from a dream because I must be sleeping for me to forget my place. Didn’t I remember I was simply a girl not at par with, but always below, a man?

I got patted on the shoulder, with condescending looks that said “there, there now, sweetie” as I felt the smugness of their smiles. In this church a woman is not equal to a man. Patriarchy rules and even something as simple as passing around a mic, or leading a prayer, is only allowed when no male is around to take the lead. And even in those rare instances, the woman must cover and bow her head in respect because, well, she lacks a penis.

How dare I think I could ask to do something only a man was capable of?

I only hesitated in the shame I felt for a brief moment.

“But you’re a girl. It’s not allowed,” they insisted.

“What if I’m better at it than a brother? What if I make no mistakes at all? I can’t try just because I’m a girl?”

“Exactly. That doesn’t matter. He’s a man. You’re not. The Bible is very clear on the roles that men and women play here and at home. Why don’t you go lead a door-to-door group for Saturday?”

“But, I don’t understand. Aren’t we all capable of the same.”

And that was that. I was summoned before a circle of elders who kindly reminded me to not ask too many questions because it meant I was questioning the bible and that was a no-no. I felt shunned and alone and even though back then it broke my spirit, it also led me to seek the answers I was being pushed away from. Music became a comfort and the library my refuge. These oppressors unwillingly created a rebellious force with an unwavering curiosity and, quite honestly, we are the worst. 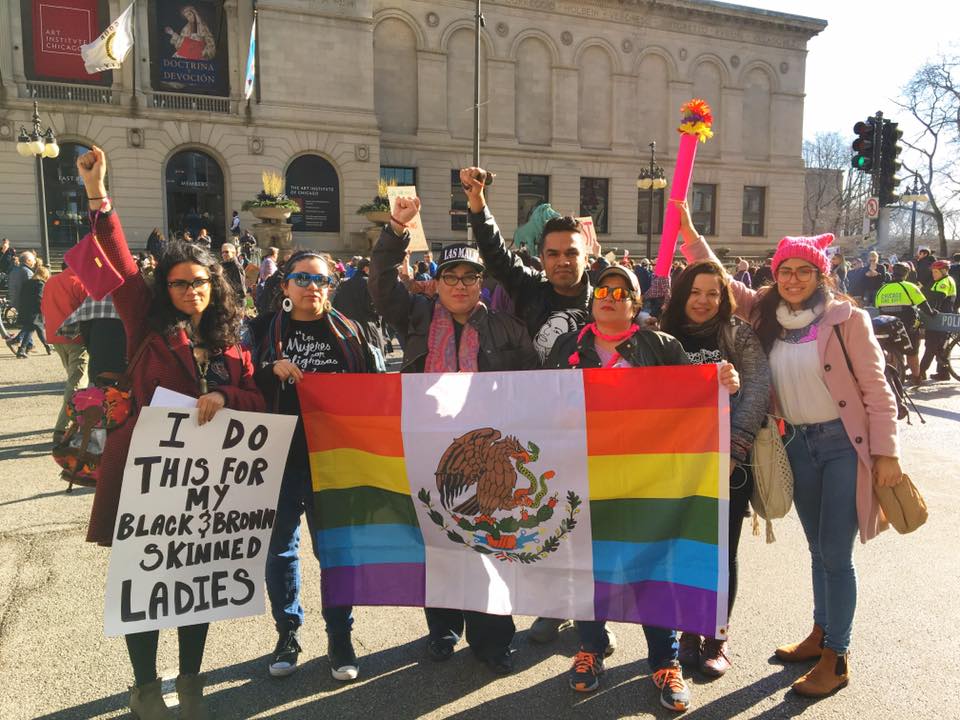 Vocalizing my stance on this matter has been a constant since then (and something I’ve gotten ‘in trouble’ for as consistently). Today’s historic march – which news reports are claiming as one of the largest in US history – simply reaffirms that I am not alone when facing these struggles.

Despite the setbacks, oppression and inequality we continue to face, on Saturday, January 21st, 2017, we let you know we are bigger, stronger and even more united than you could have possibly imagined.

Whether you are just now beginning to engage in social justice or you’re an active advocate, today’s Women’s March demonstrated our ability to educate, organize and strategize. Across the world, our voices rang loud and clear – we are done with being undervalued and will continue to refute your misogyny and facism.

Change begins and continues as a force united in resistance against any form of oppression.

We just showed the kind of numbers we’re capable of gathering. Imagine the thousands more that weren’t able to assist. Your surprise at our partial numbers was expected, typical of patriarchy, and, quite frankly, we’ve had just about enough. 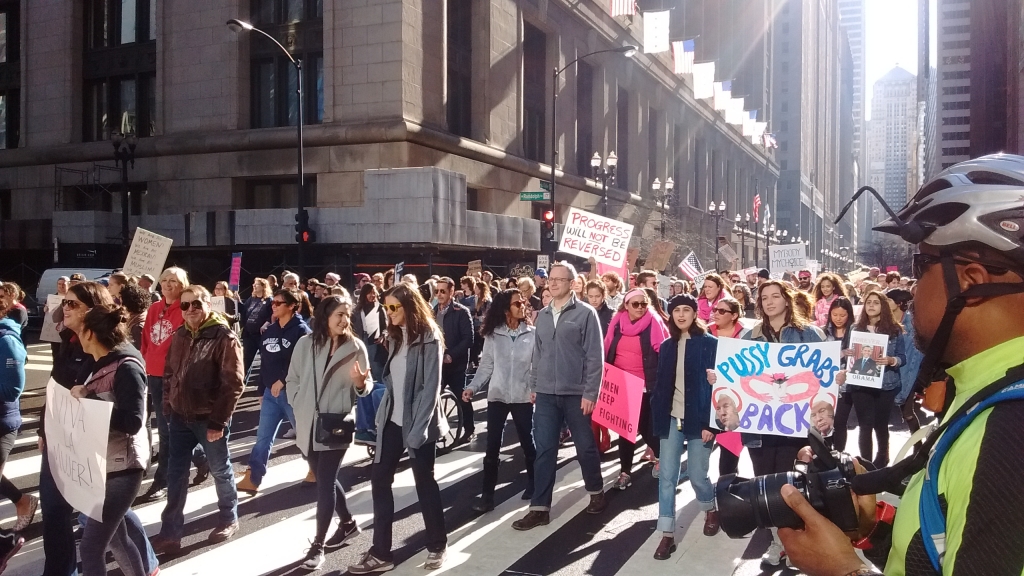 Now we continue mobilizing. Share your stories. Listen and support one another. Connect with others and fortify those bonds of resistance. Engage with your community and build power from within. Educate the ignorant and those opposed to our efforts simply because they don’t understand. We must stand united. Meet, socialize and rally. Learn about and contact your local representatives. Ask questions, seek answers and prove you understand these injustices, and your privilege – whatever the case may be – with actions. Be an ally or stay out of the way. This isn’t a one-time thing. This is our reality. And I, for one, am gonna be all Lupita D’Alessio in Mudanzas about it.

Not sure where to start? I’ve put together a list of upcoming Chicago events and links to websites and related organizations. If you’re hosting your own event, or would like to share your story, let me know. It would be an honor to learn more about your experiences and what you’re doing out there that others need to find out about. (Reach out: enchufatechicago at gmail dot com) 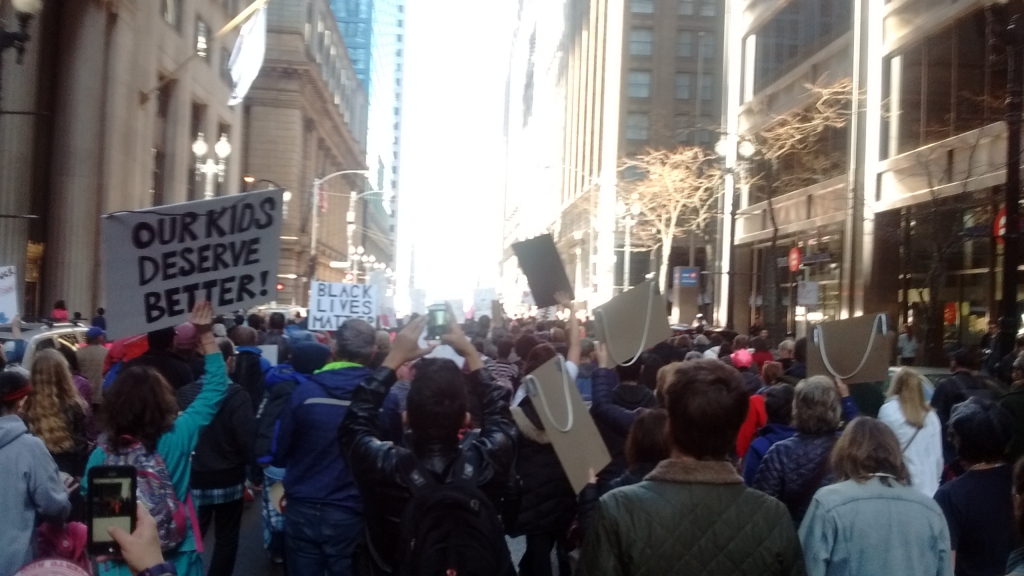 Shake It Up for Justice Fundraiser (Lagunitas) – Latino Union of Chicago and Centro de Trabajadores Unidos cordially invite you to our first fundraiser of the year at Lagunitas Brewing Company in Little Village. Join us as we Shake it Up for Justice and fundraise to raise workplace standards for immigrant workers in Chicago and surrounding suburbs. Make sure to arrive early, our fundraiser is only from 5:30-8:30pm! Catering will be provided by The Visionaries Burrito Co-Op, a women cooperative from Southeast Chicago.

Bystander Intervention Training (UIC Campus Advocacy Network) – This training will focus on ways to intervene in public instances of racist, anti-Black, anti-Muslim, anti-Trans, and other forms of oppressive interpersonal violence and harassment while considering safety of all parties.

Geographies of Justice Seminar: Education in a Global Context (UIC Student Center East) – The event will explore how education institutions and systems operate globally. Panelists will discuss how organizers, artists and writers are analyzing, engaging and resisting public education, pedagogies and epistemologies, especially for marginalized communities.

Love Trumps Hate Open Mic (Olin Studio) – Olin Studio is hosting “an open mic to express ourselves after inauguration day. We would love to see all of you, no matter what you have to share. This is open to anyone, and any kind of performance that is legal, safe, sane, consensual and does not incorporate hate speech. If you have any questions, please contact: lovetrumpshateopenmic@gmail.com”

Cumbiasazo Dance Party featuring Sonorama and Gingee (CA) (Double Door) – This tropical dance party is a great way to meet those advocating for equal rights across the board. From live painting by local artists or the two levels of tropical and cumbia artists taking over the sounds that set the warm, tropical vibe, you will be introduced to a safe space for cultural exploration. Respect.

DIY Natural Body Care Open House (Sugar Beet Food Co-op) – Come learn how to create your own natural body care products with the Beet! Allison, our Wellness manager will show you how to create a Sugar Body Scrub and a Soak Blend. You will get the basic ingredients and be able to customize the scents at the event. Take home your customized creations – one of each item. Perfect for winter pampering, or get ready for Valentine’s Day.

Panel Discussion: Resistance In and Around Nature’s Metropolis (Gallery 400) – This panel discussion will address how food production intersects with environmental and social justice and discuss how facilitating land access for those without can soothe racial and economic disparities around healthy food.

Lily Be’s “No Hay Mal” (Free Street Theater) – Own your truth. Own your sh*t. Own your story. Raw, straight from the hip, and only mildly filtered, Lily Be’s one-woman show NO HAY MAL is a cheat guide to creating and being for anyone who has ever felt knocked down, rejected, or flat-out disposable. Performed in English with some Spanish.

Africa Night: Black History Celebration (The Promontory) – “Bring Out The Entire Framily to this Entertaining, Edu-Taining, Up-Lifting, Unifying, and Out-Standing Event – Where We Will Celebrate Our Story, In Honor of Black History Month. Although, We Strive To Realize Our Story Every Single Day Of Our Lives, We Will Turn All The Way Up At This Celebration – Join Us!”

Music for the Movement: A Fundraiser for Black Lives Matter Justice for Families (The Promontory) Proceeds from this event, hosted at The Promontory, benefit the families of victims of police violence.

I’ll continue to add events in our calendar. Make sure to check back or follow us on Facebook for updates.

Most photos by me except banner photo by Jerry Reyes.

The Walls of Trump

It looks as though the great walls of Trump's empire are finally crumbling down. … More

You can keep your watches, cars and trips to Paris … More