Queens, NY — Staff at Queens Defenders were deeply disappointed and concerned to learn of the summary firing this week of two colleagues in apparent retaliation for their union activities. Queens Defenders’ Executive Director, Lori Zeno, terminated both employees in the midst of a union-drive at the organization; at a time when employees were expected to be receiving and returning union-election ballots to the National Labor Relations Board. Queens Defenders’ Attorneys and Social Workers regard this action as an illegal and immoral attempt to intimidate employees against organizing and forming a union 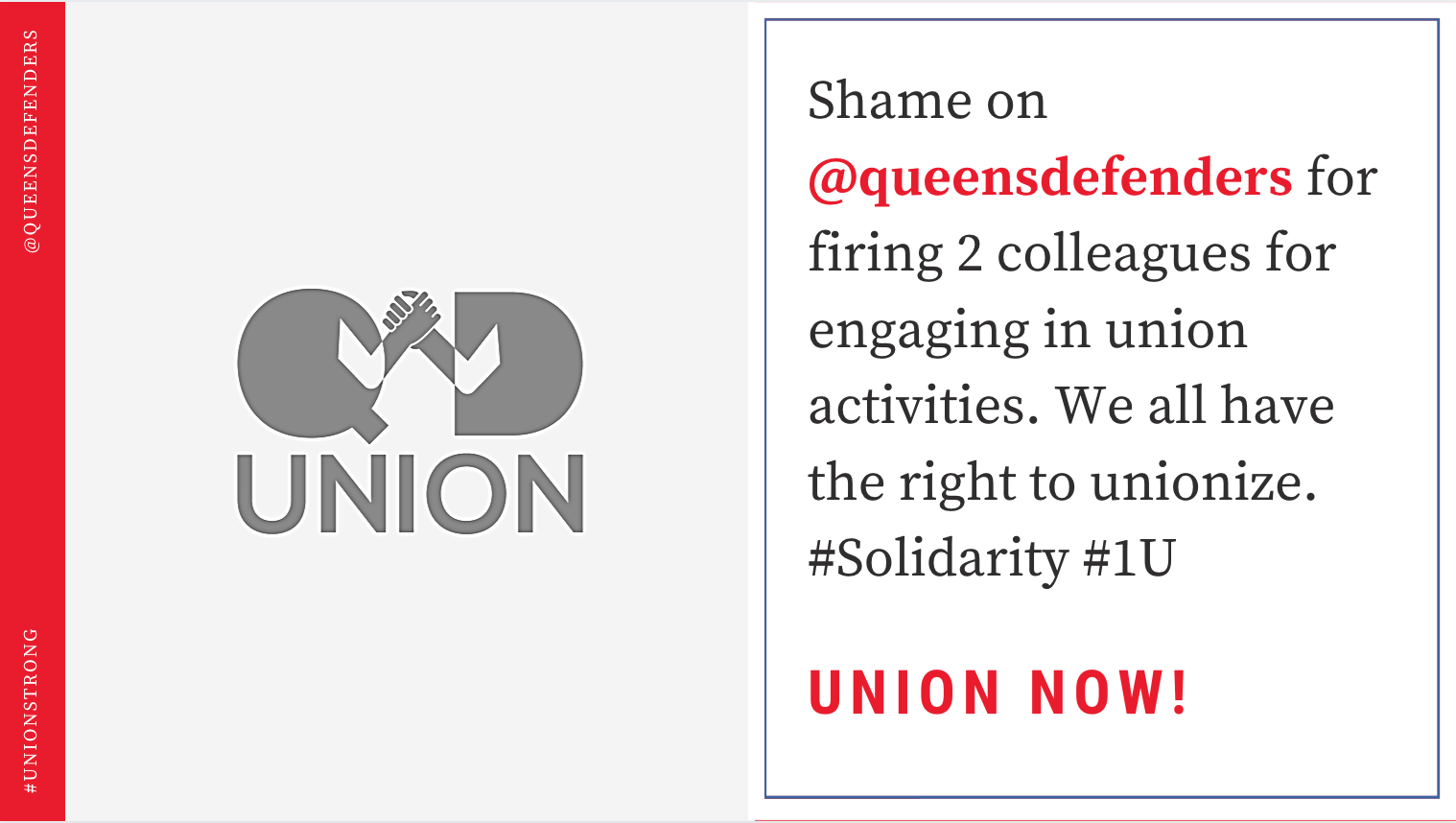 The firing of two women of color represents a continued escalation of heavy-handed union-busting activity on the part of Ms. Zeno. On December 16th, the Staff Attorneys and Social Workers of Queens Defenders announced their intent to unionize with the Association of Legal Aid Attorney, under UAW Local 2325. About ninety percent of eligible staff members signed cards in support of unionization.  Ms. Zeno and Queens Defenders management refused to voluntarily recognize the union, instead forcing an election and resorting to increasingly brazen intimidation tactics in an effort to dissuade would-be union members. Ms. Zeno held a captive audience meeting that ran over two hours long; sent out misleading, offensive, and intimidatory anti-union emails; and instructed management to make phone calls to employees on a near-daily basis in the course of which it was frequently implied that a union would threaten staff job security and the organization’s contract with the city.

“ALAA vehemently condemns Lori Zeno and Queens Defenders management, for terminating two of our members this week in what we believe is retaliation for their union activity.” said Lisa Ohta, President of the Association of Legal Aid Attorneys – UAW Local 2325 “QD’s union-busting activities cannot go unchecked and they must be held accountable for their actions.  It is particularly egregious that she targeted two women of color for exercising their right to unionize.  We stand in solidarity with all of our members at Queens Defenders and demand immediate reinstatement and full back-pay for our wrongfully terminated colleagues.”

Ms. Zeno has emphasized on numerous occasions during the union campaign that her staff does not need a union, since only five people have ever been fired from Queens Defenders, all for good cause, since its inception in 1996. This claim calls into even sharper focus the timing and motivation for her actions on February 8th – when an attorney and a social worker were fired by Ms. Zeno after making their support for a union public, while ballots were ‘out’ and eligible staff were actively voting in a union election.

“Experiencing egregious Union busting tactics by an employer is never a surprise to those of us committed to gaining more rights for workers,” according to Beverley Brakeman UAW Region 9A director “but retaliating directly against targeted workers crosses a line we won’t tolerate.  UAW Local 2325 and its members have the full support of our entire regional membership – 34,000 strong – as they fight to win their union and bring back respect to the staff who carry out the important work of Queens Defenders”. 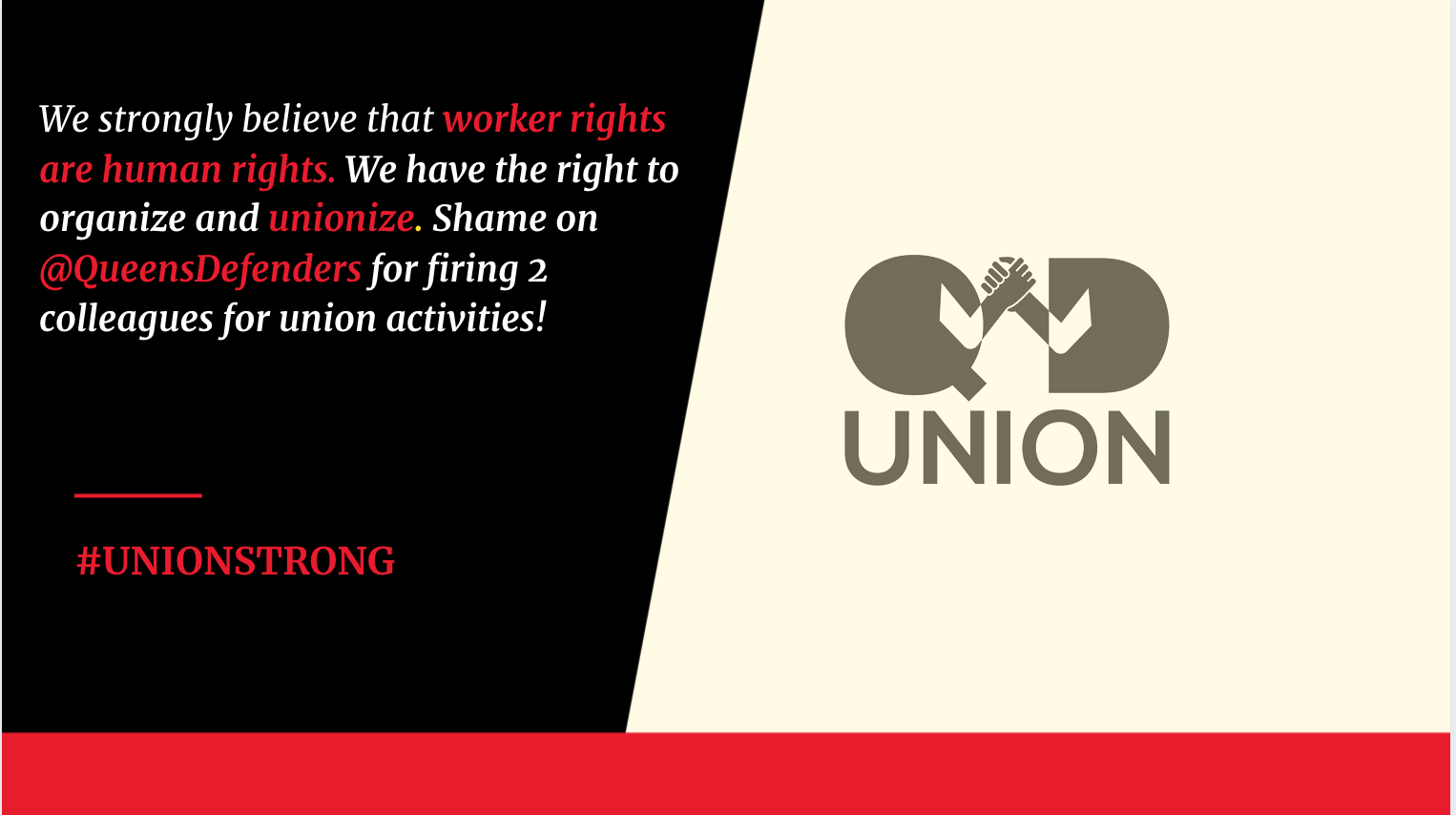 Staff has affirmed that while they reject these actions as illegal and wrong, their resolve to unionize has only been strengthened by these events. They note that while these firings would be wrong at any time, dismissal represents an especially cruel and harmful union-busting tactic during the Covid-19 pandemic. Staff Attorneys and Social Workers also point out that with each firing, Ms. Zeno harms not only her staff, but also the many New Yorkers already facing economic and racial inequality who rely on staff members for access to justice and essential social services. QD Staff Attorneys and Social Workers are now calling on Lori Zeno to reinstate their two fired colleagues with full back-pay, to respect the unionization process and the law, and to cease all forms of retaliation against her staff.

“I wanted to join the union because it’s our right. As defenders, we also have the right to be defended in our workplace,” one of the fired employees Betsy Vasquez said to NYS Focus. “It creates a space for more transparency, which we don’t have right now, and better pay for us. It gives us more collective bargaining power, which would really distribute power, so that it’s not only the people at the top that are making decisions. Everyone will have a voice. Everyone will be protected.”

People who feel like they’re under attack will look for any reason
From the health factors that make us COVID fodder and eugenics laws
One year after the bedlam on Capitol Hill, the nation is more
With politics becoming as rigidly a part of one's identity as race
When you let people who don't believe in democracy take power, you