In less than two weeks, Puerto Rican hip-hop artist and activist René “Residente” Pérez Joglar will embark on his world tour for the first time as a solo artist, promoting his new album, Residente — his most ambitious project yet.

This comes two years after he and former bandmate and step-brother Eduardo “Visitante” Cabra decided to leave Calle 13, the wildly successful musical duo which released five albums and earned the brothers 25 Grammys and 10 years of sold-out shows that put Puerto Rico on the urban-music map.

Residente’s concept for the latest album is based on the findings of his genetic composition. After taking two DNA tests, Residente took off around the world to collaborate with musicians from the areas of his ancestry: Siberia, the Caucasus, China, West Africa and, of course, Puerto Rico.

He integrates traditional tribal sounds from remote mountains, small villages, Chinese opera and European cathedral organs, introducing to his listeners a newfound sense of connectedness and human origin. Not too far removed from his politically charged, sexually explicit and humorously sarcastic lyrics, Residente’s verses bring a more reflective and profound tone to his album, including a revelation about his family ties with Hamilton’s Tony award-winning writer, Lin-Manuel Miranda.

Dabbling in the world music genre, Residente may risk speculation from some of his fans or gamble away a future Latin Grammy category nomination. Yet, this album is an outstanding testament for maturing urban artists to allow themselves the freedom to delve and evolve globally and masterfully regardless of skepticism and industry pressures.

Like most burgeoning front men, it’s no surprise the 39-year-old Residente reached a point in his career that demanded he take center stage with a new “all immigrant” band full of talented guitarists, percussionists and vocals backing him. They’ll be kicking off the tour on June 17 with his huge fan base in Mexico City. Then he’s off to Europe, several major U.S. cities, and South America.

This past March, Residente gave a set of sneak-peek performances at the 2017 South by Southwest music conference in Austin, Texas. Full of energy, alluring power, and unfiltered political statements on the current state of affairs in the United States, along with his advocacy for an independent Puerto Rico, he left thousands of hardcore fans screaming for more. 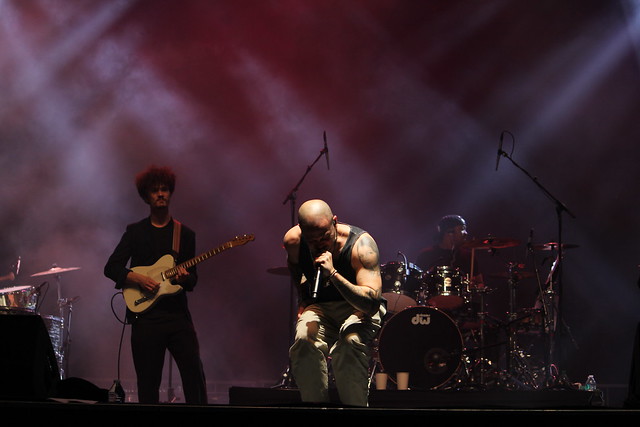 And they will get more.

This summer Netflix will release the accompanying feature-length musical documentary, Residente. As Residente’s directing debut, the film was beautifully filmed as he went around the world collaborating with musical artists and communing with tribesmen, soldiers and war orphans in remote and exotic places. However, there are moments of ambiguity as he struggles to balance between leading as the protagonist and providing meaningful context to so many countries and musicians.

Nonetheless, the documentary adds profound depth to his album.

His directing ventures do not stop there.

A great chat about music, art, Film and Puerto Rico with my homie Benicio del Toro before dinner. pic.twitter.com/0afBBdUreE

Tremenda charla junto a este amigo y maestro Alejandro González Iñárritu. It was Great to chat with this friend and master ? pic.twitter.com/DVjjkazItV

Can we expect Residente to take on more directing projects in the future? Let’s wait and see.

Meanwhile, with Residente hitting the road promoting his new album, it’s a wonder he was able to find time in his busy schedule to participate in the Puerto Rico’s national strike on May 1 and meet with recently released Puerto Rican political prisoner Oscar López Rivera.

Considering the upcoming referendum on the political status of a bankrupt Puerto Rico on June 11, there is no doubt Residente will be fueled up with powerful messages for his upcoming tour — whether you agree with him or not.

In his new, vibrant, and urgent documentary, 'My Imaginary Country,' Chilean filmmaker Patricio Guzmán returns to the

Even now that another hurricane has torn through the island, leaving its people in the dark

If the people of Puerto Rico want to retake control of their energy system, ensure their

Sharis Delgadillo is a storyteller, activist and multi-platform content producer with experience in broadcast journalism and communications humanizing diverse voices and championing U.S. Latino narratives towards more inclusive portrayals. Sharis has more than 10 years of experience in media including a master's degree in broadcast journalism from USC with unique reporting experience in Israel and South Africa. She recently covered the Democratic National Convention, Sundance Film Festival, and South by South West, and developed communication campaign strategies for legislative reforms.

Film Review: All Aboard the Bad Bunny ‘Bullet Train’

It was a good week to be Bad Bunny, who saw his World's Hottest Tour kick off with sold-out shows … More