Graphic novelist, philanthropist, and activist Edgardo Miranda-Rodriguez on Wednesday, April 15, 2020 (formerly new comic book day) took to social media to promote the variant cover to the soon to be released and highly anticipated third issue in his graphic novel series La Borinqueña. This cover introduces the work of Ana Teresa Rivera Fuentes in her debut as a comic book cover artist and features Miranda-Rodriguez’s original character La Borinqueña flying above a crowd of protesters in Puerto Rico as she carries the Puerto Rican flag, which also is celebrating its 125th anniversary in 2020. However, what is raising eyebrows is who also is marching alongside La Borinqueña. Celebrated actor and activist Rosario Dawson of the critically acclaimed series Briarpatch tweeted on the same day of Miranda-Rodriguez announcement that not only did she see herself on the cover, but she was also in the company of other Latinx activists and celebrities such as Grammy Award-winning artists Bad Bunny, Residente, Ricky Martin, and Ile. 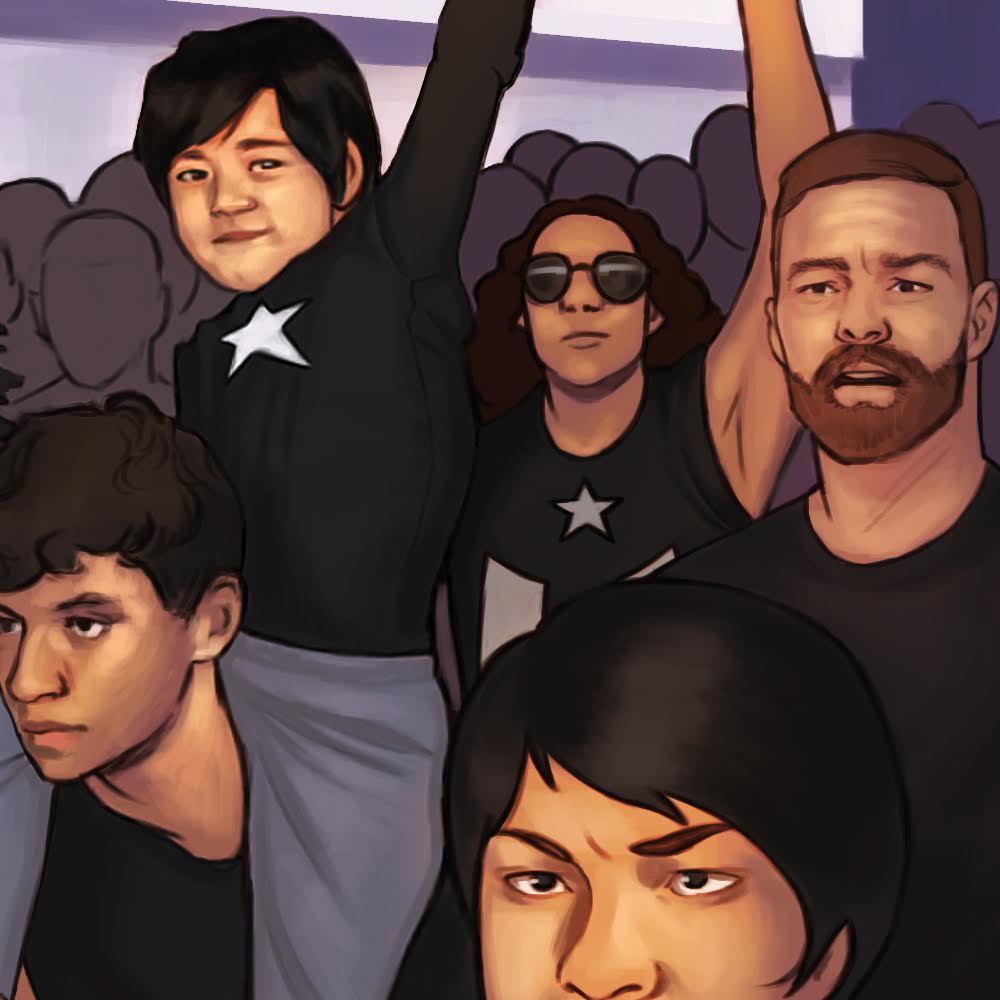 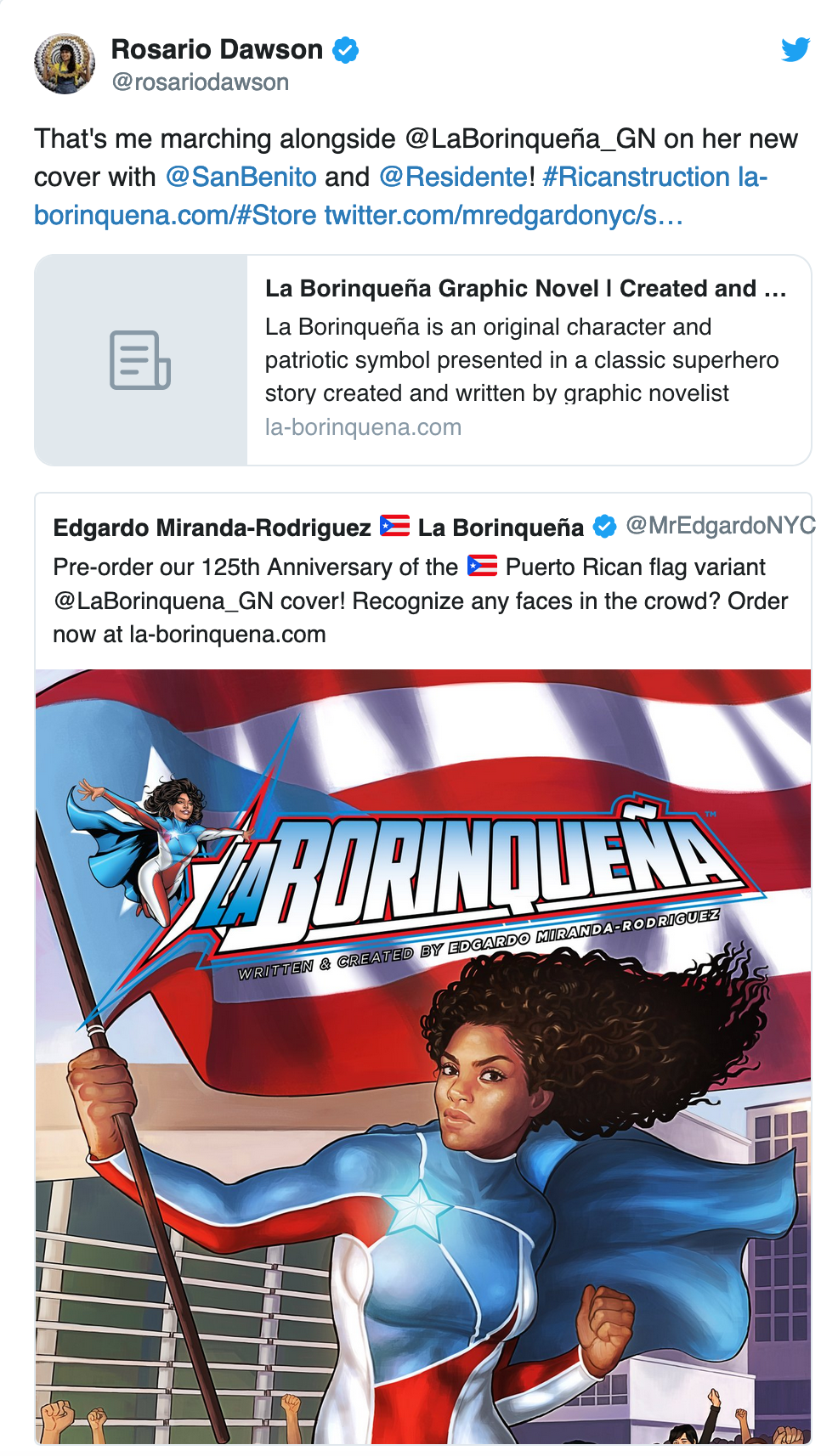 Miranda-Rodriguez hopes to raise money for the production of the third installment of his independently published graphic series by offering the book to readers as a pre-order. 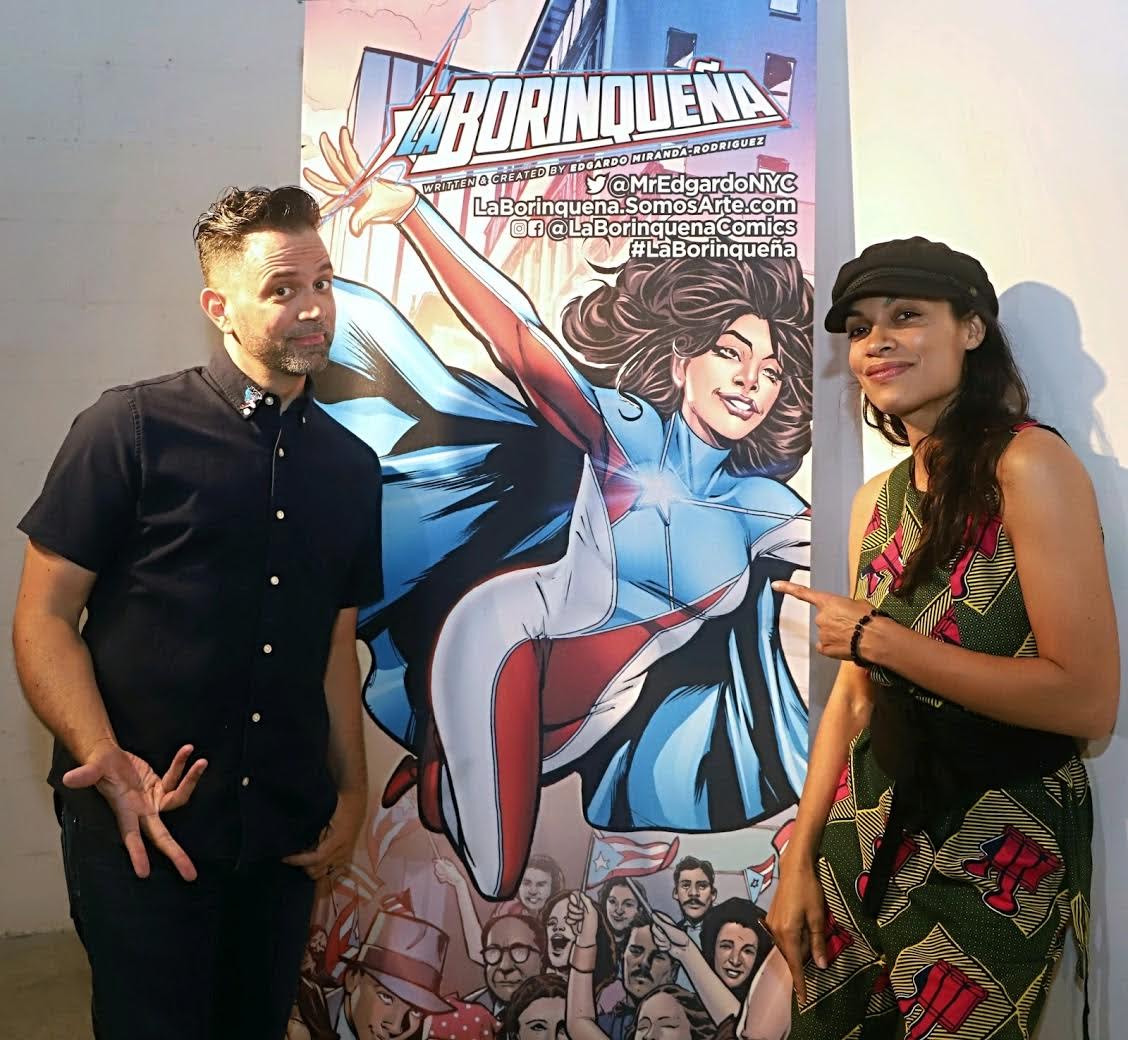 While promoting the release of his upcoming third issue of La Borinqueña, Edgardo Miranda-Rodriguez is actively involved in his latest charitable campaign to raise money to purchase and donate PPE. Via Masks For America Miranda-Rodriguez has collectively raised over $250,000 on GoFundMe ($125,000), ActBlue via Alexandria Ocasio-Cortez ($50,000), and Be A Hero ($20,000). To commemorate the contribution and support of Masks for America by Alexandria Ocasio-Cortez, legendary comic book artist Bill Sienkiewicz created an illustration along with La Borinqueña of the two Puerto Rican women side-by-side digitally colored by Chris Sotomayor. Along with his team of co-organizers including fashion designer Bob Bland (co-founder of the Women’s March), school-teacher Kristin Mink, and Dr. Sanjeev K. Sriram aka Dr. America and various volunteers have already distributed 34,000 FDA-certified KN95 masks to healthcare workers on the frontline throughout New York City. In addition, Miranda-Rodriguez shipped 6,000 masks to Puerto Rico to be distributed by Mayor Carmen Yulín Crúz and a team of doctors on the island inspired by La Borinqueña calling themselves Doctorxs Borinqueña. 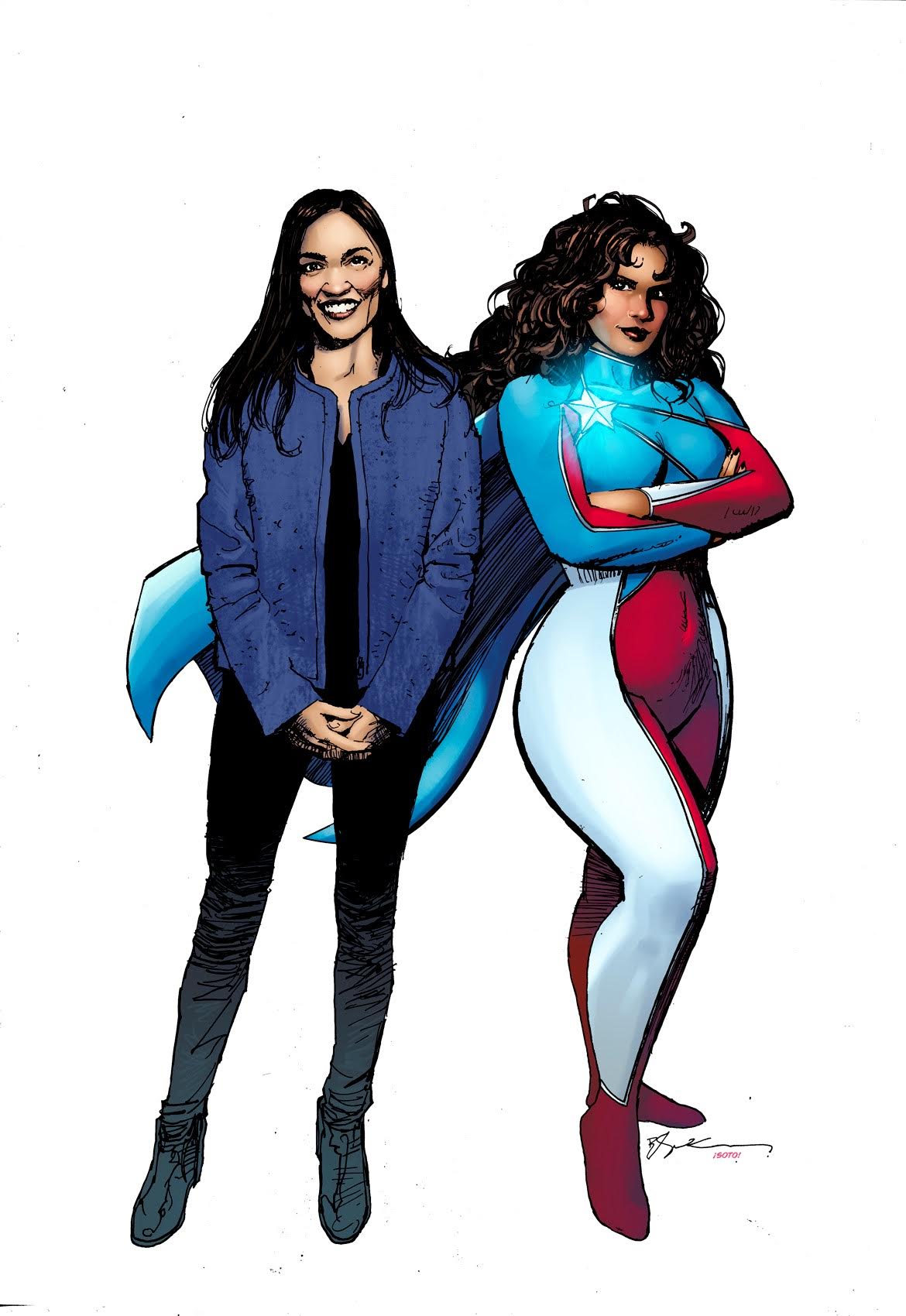 New comic book art and activism would be enough for most while during this pandemic, but that isn’t stopping Miranda-Rodriguez. Washington D.C.’s PEN/Faulkner Foundation has Miranda-Rodriguez on their roster of authors for their Writers in Schools program for D.C.’s public school system. In May, Miranda-Rodriguez will be visiting with students at the the Sacred Heart School and the DC Bilingual PCS for a remote reading and presentation to students who are presently studying La Borinqueña. 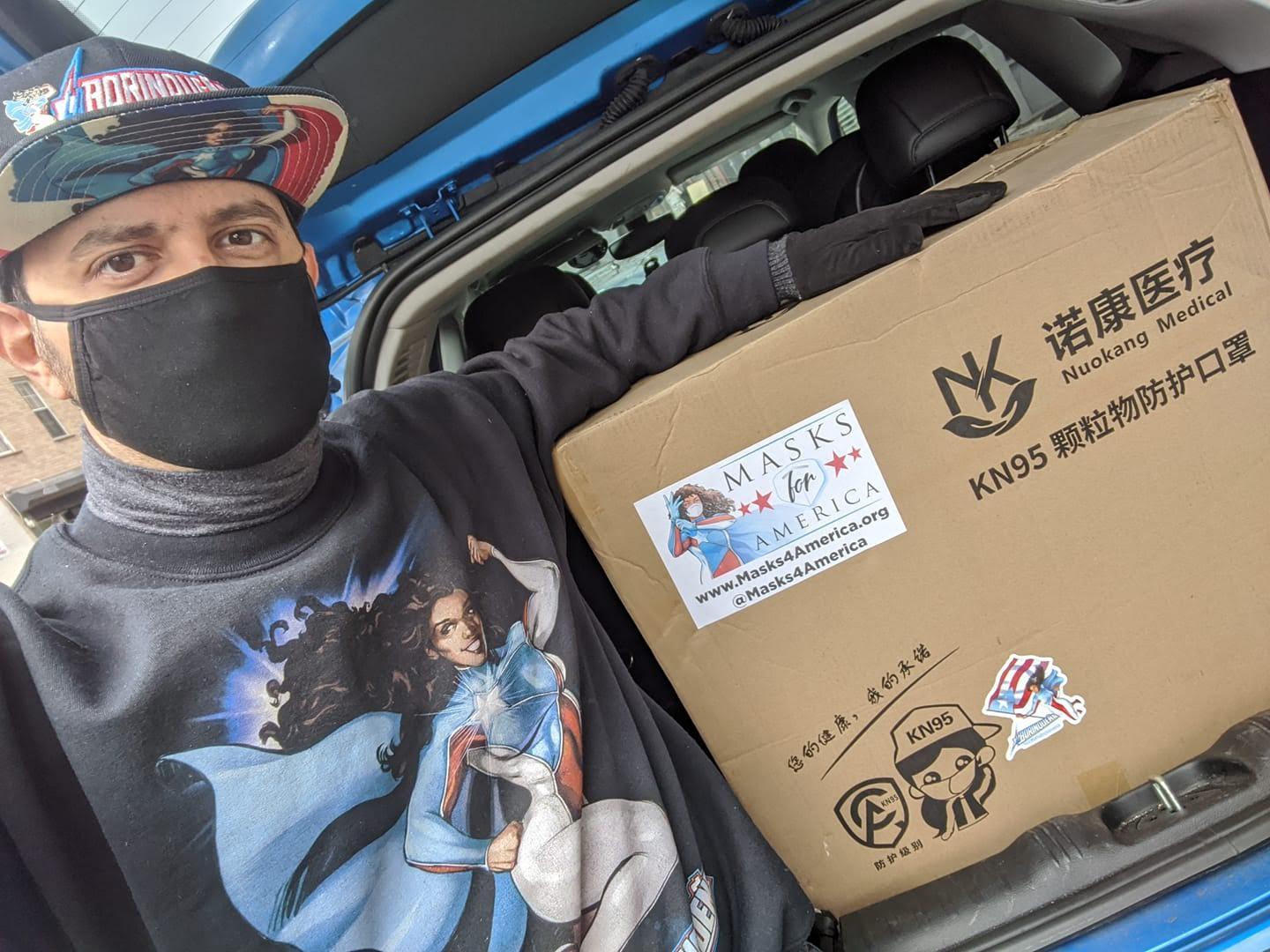